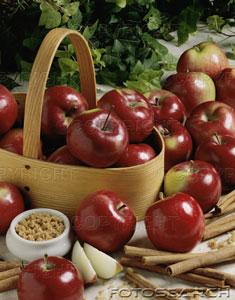 To me the best part of an apple pie is the apple, I'm not big on the crust. Also it's way to many carbs. This is how I get my fix.

1 Apple (I prefer Macintosh)
Cinnamon and Splenda to taste

Seed and core the apple then cut into slices on the thin side. I leave the skin on.

Arrange apples on a microwave safe plate in a single layer and sprinkle with Cinnamon and Splenda.

I have an old microwave only 500 watts, so I leave it in 3 minutes. You will probably need 1 or 2 minutes depending on your microwaves wattage.

*I use an empty shaker jar and put Splenda and Cinnamon in it, shake to blend. Leave room at the top, so you can mix the two. This is also great on oatmeal, grapefruit etc.

Also remember to shake well before each use, Splenda is lighter than Cinnamon.

Apples without seeds and stem are 3.9 carbs an ounce 1 medium size apple is about 20 carbs

According to some medical studies, cinnamon can lower your glucose, and even if it doesn't, it tastes good, so enjoy.