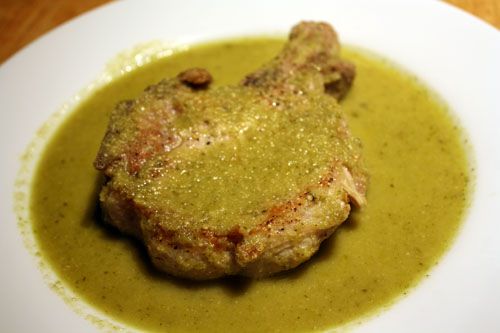 Mole is the generic name for several sauces used in Mexican cuisine recipes, as well as for dishes based on these sauces. Outside of Mexico, it often refers to a specific sauce which is known in Spanish by the more specific name mole poblano. The word is also widely known in the combined form guacamole (avocado concoction). In contemporary Mexico, the term is used for a number of sauces, some quite dissimilar to one another, including black, red, yellow, colorado, green, almendrado, and pipián.

Boil the chicken with garlic, onion, a stalk of coriander and salt. In blender blend all ingredients except the epazote and pumpkin seeds.

Serve hot over the meat, accompanied with a warm tortilla.