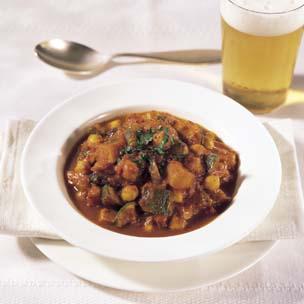 I just tried this recipe from Williams-Sonoma for a camping trip, and it was delicious! It's more of a stew than a chili, but nevertheless excellent. I increased the quantity of cinnamon, cumin, and coriander a bit (all were originally 1 1/2 tsp.) and seasoned with salt at the end. It was served over couscous.

Serve this richly spiced vegetarian chili with toasted pita points or on a bed of steamed couscous or rice. Other winter squashes such as Hubbard or acorn may be used in place of the butternut squash.

Original recipe called for 1 1/2 tsp. each of cinnamon, cumin, and coriander.

In a saucepan, combine the chilies and water and bring to a boil.

Remove from the heat.

Cover and let stand for 15 minutes.

Using tongs or a slotted spoon, transfer the chilies to a work surface; reserve the liquid. Discard the stems and seeds from the chilies. In a food processor or blender, combine the chilies with the whole garlic cloves and 1/2 cup of the liquid.

Process until smooth. Set aside.

Add the onion, the sliced garlic cloves, turmeric, cinnamon, cumin and coriander and sauté until the onion and garlic have softened, about 5 minutes. Stir in the tomatoes and their juices, butternut squash and the chili puree.

Cover and simmer, stirring occasionally, until the squash is just tender, about 25 minutes.

Stir in the chickpeas with their liquid, the zucchini, dried apricots and prunes.

Simmer, uncovered, until all of the squashes are tender, about 15 minutes more.

Transfer to a warmed serving dish and serve hot.