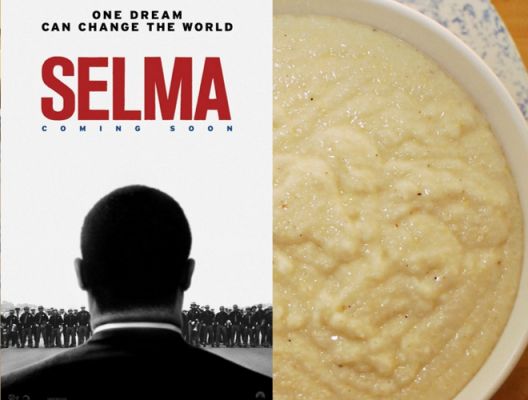 “Selma” is based on the historic three-month period in 1965 when Dr. Martin Luther King, Jr. led the campaign for equal rights.. The series of marches from Selma to Montgomery culminated in the landmark Voting Rights Act of 1965.

It was around the Sullivan family kitchen table where Dr. King and his team planned The March and nourished their bodies and souls with Mrs. Sullivan’s home cooking.

Heat the 2 cups water and milk in a heavy-bottomed saucepan until just simmering.

While the milk is heating, put the stone-ground grits into a large mixing bowl and cover with cool water. Stir the grits assertively so that the chaff floats to the top. Skim the surface carefully and remove the chaff. Drain the grits in a fine strainer. (If you are using regular grits, skip this step.) Stir grits into the simmering water and milk. Cook, stirring often, until the grits are tender to the bite and have thickened to the consistency of thick oatmeal. As the grits thicken, stir them more often to keep them from sticking and scorching. Regular grits are done in about 20 minutes, but stone-ground require an hour or a little more to cook, and you will have to add additional milk and water as needed.

Season the grits generously with salt and stir in the cream and butter. Remove from heat and let rest, covered, until serving. Serve hot.