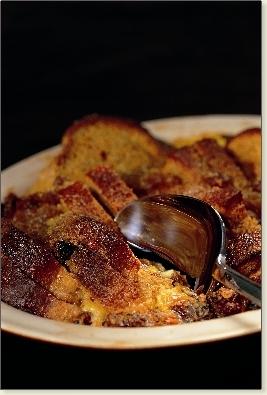 Preheat the oven to 350 degrees F.

Grease a pudding dish with a capacity of about 6 cups with some of the butter.

Put the sultanas or raisins in a small bowl, pour the rum over, and microwave them for 1 minute, then leave them to stand. This is a good way to soak them quickly but juicily.

Make sandwiches with the brown bread, butter and ginger jam (2 tablespoonfuls in each sandwich); you should have some butter left over to smear on the top later.

Now cut the sandwiches in half into triangles and arrange them evenly along the middle of the pudding dish. I put one in the dish with the point of the sandwich upwards then one with flat-side uppermost, then with point-side uppermost and so on, then squeeze a sandwich-triangle down each side – but you do as you please. Sprinkle over the sultanas and unabsorbed rum that remains in the bowl.

Whisk the egg yolks and egg together with the sugar, and pour in the cream and milk. Pour this over the triangles of bread and leave them to soak up the liquid for about 10 minutes, by which time the pudding is ready to go into the oven. Smear the bread crusts that are poking out of the custard with the soft butter, mix the ground ginger and Demerara or turbinado sugar together and sprinkle this mixture on your buttered crusts and then lightly over the rest of the pudding.

Sit the pudding dish on a baking sheet and put in the oven to cook for about 45 minutes or until the custard has set and puffed up slightly. Remove, let sit for 10 minutes – by which time the puffiness will have deflated somewhat – and spoon out into bowls, putting a jug of custard, should you so wish, on the table to be served alongside. Serves 6.