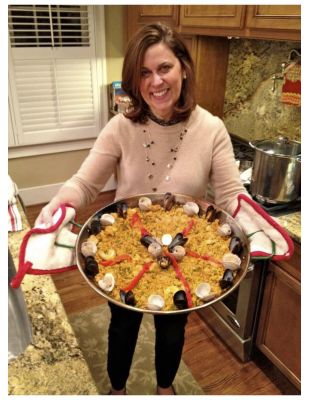 Paella brings my family together! Two of our four children studied abroad in Spain and as a family we have all come to love Spanish foods but especially paella.

Paella can be made with a variety of ingredients. Often people use chorizo sausage, calms, scallops, fish, calamari, lobster, chicken, pork and veggies. Some purists think you shouldn’t mix seafood and meat in paella. The recipe below is what I do most often and I mix seafood and meat. My husband loves the chorizo sausage! Experiment and find what you like. My paella pan is large (18 inches) so adjust for your size of pan.

3 – 4 large Spanish onions – chopped
2 large green peppers - chopped
½ of an entire garlic bulb
Olive Oil – keep adding to keep food from sticking while
browning the ingredients in early stages of cooking
500 grams pork tenderloin – diced small (1-1.5 pounds)
500 grams chicken thigh meat – diced small (1-1.5 pounds)
Chorizo Sausage as much as you want
2 teaspoons of oregano; Salt and Pepper to taste
3 large tomatoes – meaty ones
1 cup green peas3 cups paella rice (Arroz – Calasparra)
1 tablespoon of saffron
1 tablespoon of smoked paprika – sometimes called Hungarian paprika
500 grams of shrimp – about 20 medium/large shrimp or about 1.5 – 2 pounds (and/ or scallops; and/or fish
Stock –(fish, veggie, etc) – about double the amount of the rice so 6 cups for this recipe
Mussels as many as you want (or clams or both)
Garnishes: 3 Tablespoons of Parsley; lemon wedges; roasted red peppers

Brown and cook the first three ingredients above for 1.5-2 hours until it is mushy. If you don’t have time to do this for 2 hours it is ok.

Add the chicken and pork and sprinkle oregano over meat while cooking; add sausage

Add Saffron–just straight from bottle rubbing it a bit, I don’t mix with water, add paprika

for 15 minutes until mixture has coated rice well.

Add peas; then add stock slowly and cook until rice is soft – about 45 minutes. It’s good not to stir too much towards end of rice being cooked and to let the rice cook into the pan a bit. Also add only enough stock to cook the rice and to allow the edges and bottom get crispy. The toasted rice at the bottom and edges of the pan is called socarrat in Spain. This is considered a delicacy and although hard to achieve it is the goal for perfect paella.

Cook mussels in small amount of water until they are cooked & open. Place mussels around the edge of pan. Garnish with lemon wedges, sliced roasted red peppers and parsley.