By piehole
Member since 2007 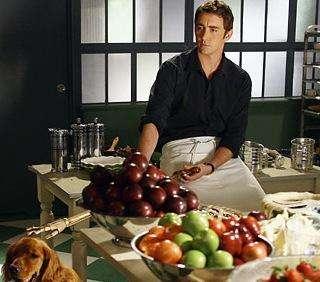 Ned: "Yesterday's Four Berry Pie was actually three-and-a-half because I ran out of cranberries. I didn't tell you that."

Chuck: "Actually, you did. You asked if orange counted as a berry. And I said it didn't, but no one had to know but us."

Combine flour, salt, and sugar. Mix with a fork. Add shortening and mix with a pastry blender or a fork until well combined. Add ice water and mix lightly with a fork until dough is able to be formed into a ball. Spray pie pan lightly with a non-stick cooking spray. Use approximately half of the dough to form the bottom crust and the remainder for the top crust.

Mix flour, sugar and cinnamon in a bowl. Mix all berries in a separate bowl. Add half of the dry ingredients with the berries.

Place a layer of berry mixture in pie pan and top with part of the remaining dry ingredients, continue until all berries and dry ingredients are used.

Dot the top with butter. Top with crust. Brush top crust lightly with water and sprinkle with sugar.

Bake in preheated oven for approximately 40-45 minutes -- until juices are bubbly and crust is browned.

AliveAgainAvenger
I just finished using this recipe (along with this method) to make cup-pies. Although I had trouble with the method, the filling was absolutely delicious! I will be making it again--in fact, in another week, for my family's Memorial Day get-together. I did find that the flour-sugar-cinnamon mixture was too much, but that might have just been because of the filling-to-crust ratio with the cup-pie method. I used frozen berries, which worked fine for me. I would definitely prefer fresh, but they were rather expensive this time of year, so I opted for the frozen version. I had some trouble with the raspberries--they were stuck together and mushy, much more so than the other berries. But they still tasted fine, nonetheless. Oh yes, and I used equal amounts of berries--1-1/2 cups of each, instead of overloading the blueberries. I liked that ratio just fine; the flavors blended well, and I got just enough blueberry to feel familiar and comfortable, but enough of the other berries (especially the cranberries) to feel like it was special and a bit exotic. Thank you so much for posting this recipe. I am a huge fan of "Pushing Daisies," and I was really excited to find a recipe already put together for the Four-Berry Pie. I love cranberries, so found this recipe idea intriguing, but didn't want to spend the time to find my own version--kitchen experiments are so exhausting and expensive. Your recipe was wonderfully tasty!