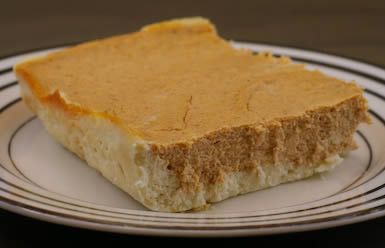 Preheat oven to 325 F. In large bowl combine softened cream cheese, Splenda, and vanilla. Beat with electric mixer until smooth. Blend in eggs, one at a time. Remove one cup of batter and spread into bottom of glass or crockery baking dish which has been sprayed very lightly with non-stick spray. (I sprayed my dish too much and had a hard time getting the first layer spread evenly. Next time I would put a very thin layer of chopped pecans over the nonstick spray.)

Add pumpkin and spices to remaining batter and stir until blended. Carefully spread pumpkin layer over first layer. Bake in preheated oven 35-45 minutes, or until center is almost set. Allow to cool, then chill several hours or overnight. Serve with whipped cream if desired and wait for compliments.

I used a 10" by 8" glass baking dish to cook this. Next time I think I would double the recipe and only increase to a 9" by 13" baking dish to make a thicker cheese cake. This would show of the layers better. Some cinnamon dusted on the top would have been a nice touch.

betsymc51
How many packages of cream cheese?