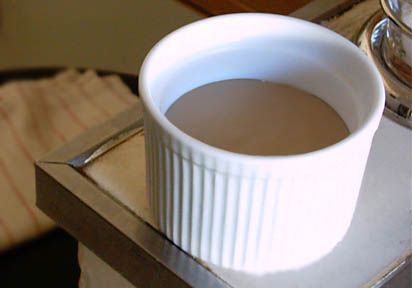 Nocino is a pleasantly bitter liqueur made from green walnuts, spices, and lemon. In the Mediterranean, it's usually made around the end of July. I hear tell it coincides with the Feast of San Giovanni in Italy. It can be a bit of an acquired taste, though, and the dessert chef David Lebovitz suggested introducing people to it through a custard. Great idea, I thought, but I wasn't in the mood to fuss with eggs and water baths, so I went a simpler route. This stove top version is thick and luscious, and would be good flavored with any liqueur.

1. Mix the sugar, cornstarch, and salt in a medium heavy-bottomed saucepan. in a measuring cup, mix together the milk and heavy cream (homemade half-and-half, really). Add a half cup of the dairy to the sugar mix and whisk until you have a smooth mixture, with a consistency somewhere between a sauce and a paste. Try to work out as many lumps as possible. Once done, add the rest of the dairy and whisk to thoroughly incorporate.

2. Put the saucepan over medium heat and stir constantly with long strokes, until the pudding starts to get noticeably thicker and begins to sputter a bit. This should take 3-5 minutes. Once the pudding has hit this stage, lower the heat to low and stir vigorously for one full minute to ensure that the all the pudding has come to the correct temperature.

NOTES: This pudding is thickened with cornstarch, which is somewhat finicky. Once you take a cornstarch-thickened liquid past the "gravy" stage, it can actually be somewhat fragile. Puddings will turn watery and collapse if they're disturbed before fully set and chilled. This is why you don't want to touch it at all once you put it in the fridge.

If you like, you may make one big bowl or mold of the pudding. Another way to serve is to "unmold" the puddings onto dessert plates, and then dress with any number of fruits, nuts, etc... If you'd like to do this, evenly coat the ramekins with a thin layer of nonstick cooking spray before you pour the pudding in. Then simply invert onto a plate and shake a bit - the chilled pudding should slide out. Should.

If you don't like the skin that forms on the top of pudding, try this: once you've poured the pudding into the ramekins, press a piece of plastic wrap directly down onto the surface of the puddings. Then put into the fridge to set - again, no touching for two hours - and then simply peel off just before you're ready to serve.