One Pot Chicken and Chorizo 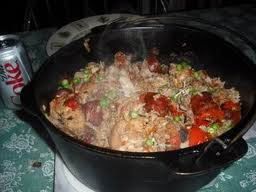 Good Lord. The Week is a magazine that prints a recipe. Sometimes good, most times too fussy for me. But this... oh this... is fantastic. Here you go!

Season the Chicken with salt and pepper

Heat the olive oil in a cast iron Dutch oven over medium-high heat.

Working in batches, add the chicken, skin side down, and cook, without turning, until the skin is a deep golden brown, about 8 minutes.

Transfer the chicken to a plate and set aside. (Pour off and discard any accumulated fat and juices, save them if the sausage doesn't have enough for sauteeing the the veg.) Add chorizo to Dutch oven and cook, stirring frequently, until lightly browned, about 5 minutes. Using a slotted spoon, transfer chorizo to a plate, leaving the fat behind in Dutch oven. Set chorizo aside.

Add oregano, red pepper, garlic, onion, and bay leaf to the Dutch oven and cook, stirring occasionally, until onion is lightly browned an somewhat soft, about 8 minutes. Add rice and cook, stirring frequently, until surface is glossy, about 2 minutes. Add wine, bring to a boil while stirring often, and reduce by half, about 1 minute. Place chicken, chorizo, and peppers into rice mixture. Pour in broth and season liquid to taste with salt and pepper. Cover the Dutch oven and bring to a boil over high heat. Transfer to the oven and bake until rice is tender and chicken is cooked through, about 1 hour, 10 minutes.

Remove the dish from oven, uncover, and gently stir in peas with a fork. Let sit for 10 minutes, covered, to allow the flavors to meld.