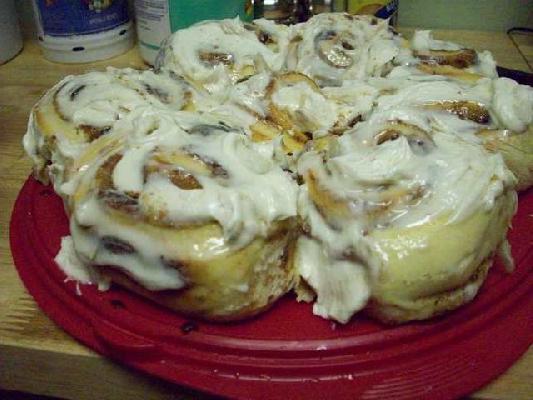 Lately I had been dying to try and make some homemade cinnamon rolls... I found a recipe at AllRecipes.com to try out.. the only problem was I did not have a bread maker as the recipe called for or bread flour... So I just improvised and did it my own way! Below is the recipe.

OK so first things first you need to take the milk and heat it up. I placed mine in the microwave for 30 seconds, then I stirred it up and heated it for another 30 seconds. I pulled it out and checked the temperature and then I added the yeast packet in. I then stirred until the yeast had dissolved. Then pour the milk yeast mixture into your kitchen aid mixer. I then added the eggs one at a time. Then the butter, salt, sugar and flour. I kept mixing until a dough form appeared. I then heavily floured my surface and pulled the dough out of the mixer. I kneaded the dough with my hands for approx 5 to 10 minutes.

Once this was done I preheated the oven to 200 degrees F and turned it off. I placed the dough in a bowl with a damp paper towel over the top and placed it in the oven to rise.

After one hour I removed the dough. Again on a floured surface I rolled the dough out.

In a seperate bowl I mixed the brown sugar and cinnamon for the filling. I then took the butter and coated the dough and then placed the cinnamon and sugar mixture all over the dough.

Then you roll the dough up and get a piece of dental floss ( this is the best trick that I learned from AllRecipes.com) you place the floss under the cinnamon roll log and raise both sides up. You then cross them and pull down. This will cut the roll in a perfect cut without smashing it as you try to cut it.

place wax paper in the pan and spray it down with Pam or the cookng spray of your choice. Place the rolls in the pan.

Then leave them to rise some more while you preheat the oven to 400 degree F. Once the oven is preheated place the rolls in the oven for about 15 minutes or until lightly golden brown on the top. While the rolls are in the oven go ahead and make the icing.

In a bowl combine all the ingredients and turn your mixer on... at first it will seem to dry and all balled up... just keep mixing and it will turn into luscious creamy frosting in no time flat!

Once the rolls come out of the oven put them onto a place and frost right away so the frosting can melt all into the rolls...

I doubled the recipe for the icing but it was too much... I think 1 and half the amount of frosting would be perfect but it depends how you like to eat them!

Thanks for checking out my recipe and ENJOY

realitysadrag
I have also been dying to make my own homemade cinnamon rolls, but haven't felt as inspired until I saw your pictures and simple instructions! I'll have to try them out immediately! Thanks!-Mary
easy1234
Had my 6 & 7 year old grandkids do this one..so simple!!!and the rolls were super delicious! the frosting was just right, and even without the frosting the dough tasted so good!. thanks .. enjoyed the pics, too.
easy1234
andromeda
always wanted to try these too to make... say this is the recepie for the bread maker.. its so simple just to make the dough in it and then when its ready you can start rocking :o) thanks for the recepie ... and all those pictures love it :o) cheers