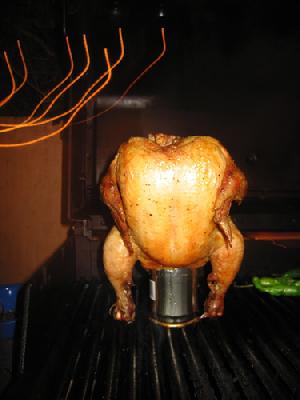 Unique Recipe A Winner in Both Taste and Presentation

Whether tailgating at the big game or feeding frenzied fans at home, outdoor chefs will be the big winners and draw the loudest cheers when they prepare the hippest, hottest and most unique-looking bbq recipe of the season: BEER-BUTT CHICKEN.

Host of public television's Barbecue America, Rick Browne, the "Godfather of Beer-Butt Chicken", guarantees that the odd-sounding, but incredibly easy-to-prepare recipe will not only wow party-goers with its unique appearance, but with its lip-smacking, incredibly moist, and virtually unmatched flavor and texture.

"Nothing can top the flavor of Beer-Butt Chicken," notes Browne, who has prepared the dish on national television for the Today Show and Regis and Kelly Live!, receiving rave reviews from both Al Roker and Regis Philbin. "And nothing can top the looks on your guests' faces when you open that grill and show them beautifully browned chickens perched upon beer cans."

virtually any type of NON-DIET beverage, including sodas and juices. The trick is to make sure that the can, inserted in the posterior end of the bird, is at least half-filled with liquid, which seasons and moistens the chicken with flavorful steam.

The beverage can may be used alone, with the bird's legs creating a pedestal, but Browne recommends such clever devices as the ChickCAN (www.bayou-classic.com), which holds the beer can firmly in place and balances the chicken, preventing spills. The gadget can be found throughout the country at stores such as Wal-Mart and Barbeques Galore.

Savvy barbecuers use two tricks to make beer butt chicken even better. First, they concoct a "rub" from their favorite spices to rub (hence the name) onto the skin of the bird not only for flavor but to give the final product a mahogany-like glow. A typical rub would contain brown sugar, garlic powder, sea salt, ground pepper, and usually a green herb (thyme, oregano, or summer savory, etc.). Second, Que Masters make up a "spray" to keep the bird moist, applying it 2-3 times with a spray bottle during the cooking period. A good basic spray includes beer (remember you only need 1/2 can inside the bird), olive oil, vinegar, and apple juice. A few sprays while the bird is having his final sauna and the skin will be tender, moist and delicious.

Browne, author of Rick Browne's Barbecue America TV Cookbook (2004), Grilling America (ReganBooks, 2003/2004), The Frequent Fryers Cookbook (ReganBooks 2003/2004), and The Barbecue America Cookbook (Lyons Press 2000), was the first chef to prepare Beer-Butt Chicken on national television, and has prepared it hundreds of times for conventions, the media, festivals, and, of course, dinner parties. It NEVER fails to elicit oohs and aahs -- and win the "best-tasting chicken" competition hands down.

This method of cooking chicken does two things: first, it helps drain off the fat as the chicken cooks, second, the beverage steams the inside of the chicken, while the outside is cooked by the BBQ heat, making it the most moist bird you've ever laid yer eyes, or gums, on. Some people put a small potato or carrot in the neck opening of the chicken to keep the steam inside.

4-5 pound chicken
12-oz. can of your favorite beer

Cook large 4-5 pound chicken with indirect heat on a charcoal or gas grill.

Use a grill with lid large enough to cook a chicken standing upright.

Mix the rub in a small bowl until it's well incorporated. Wash, dry and season the chicken generously inside and out with the rub. Work the mixture well into the skin and under the skin wherever possible. Place in medium bowl, cover and set aside at room temperature for 20 to 30 minutes.

Using a 12-oz. an of your favorite beer, pour out half the contents into a spray bottle, add the cider, olive oil, vinegar and Louisiana Hot Sauce and set aside. Take the beer can in one hand and insert it into the ChickCAN (TM)

OPTIONAL: You may add Worcestershire sauce, liquid smoke, minced garlic, onions, etc. to liquid. You can also use fruit juices, colas, or wine instead of beer.

Place the chicken over the ChickCAN rack and beer can and place on the grill over indirect heat. To prevent flare ups on the grill place the rack into a disposable aluminum pie pan and add 1/4 cup of water.

For Charcoal Grills: Place coals on one side of barbecue grill, cook chicken over the other side. Add 6-8 coals every 30 min.

For Multiple Burner Gas Grills: Turn gas to medium on one burner, place chicken over an unheated burner.

Cook for 1 1/4- to 2 hours. During the cooking time spray the chicken all around with the basting spray several times. The chicken is done when it is dark golden brown and the internal temperature reaches 180 degrees F in the thigh. Carefully remove the bird on the ChickCAN rack, and place it on heatproof counter top to rest for 5-10 minutes. Remove the chicken from the beer can with tongs while holding the rack with an oven mitt.

WARNING That aluminum can, and the liquid in it, is very hot and can burn you.

Give the chicken one more spritz of the basting spray and then carve. Serve and enjoy!