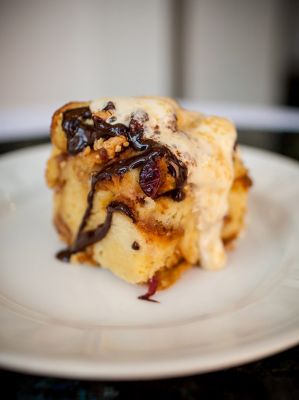 On October 9th, 2012, Tropical Foods had its Flavors of the Fall Recipe Contest with the culinary students at the Charlotte Campus of Johnson & Wales University. This recipe, PB&J Bread Pudding, was created by Justin Frazer.

Add brioche to a half hotel pan and pour cream mixture over; let the bread soak it up 30 minutes.

Melt chocolate over double boiler or in the microwave; be careful not to burn. Mix in cream and stir until sauce consistency.

Add all ingredients to a stand mixer and whip until frothy like meringue.

Cut out a square of the bread pudding. Drizzle the chocolate ganache and add a dollop of maple whip; caramelize using a blow torch.