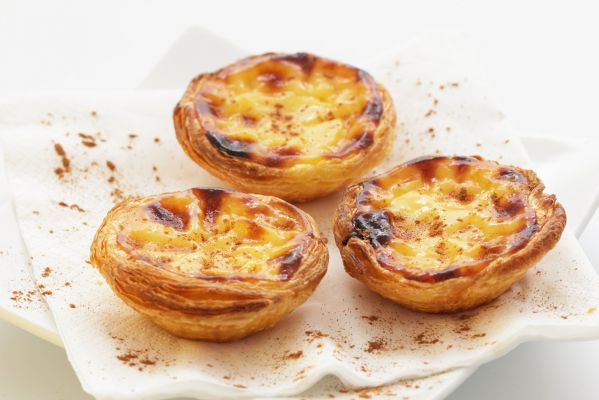 1. To make the dough, place the flour, salt, and water in the bowl of a stand mixer fitted with a hook. Mix for about 30 seconds until soft and pillowy dough forms that cleans the side of the bowl.

2. Place the dough on a generously floured work surface. Pat the dough into a 6-inch square using a pastry scraper. Sprinkle with flour, cover with plastic wrap, and let the dough rest for 15 minutes.

3. Roll the dough into an 18-inch square. Use the scraper to lift the dough and add flour underneath to avoid the dough sticking.

4. Brush excess flour off the top of the dough, trim any uneven edges, and using a small offset spatula dot and then spread the left two-thirds of the dough with a little less than one-third of the butter to within 1 inch of the edge.

6. Turn the dough packet 90 degrees to the left so the fold is facing you. Lift the packet and flour the work surface. Once again roll out to an 18-inch square, then dot and spread the left two-thirds of the dough with one-third of the butter, and fold the dough as in steps 4 and 5.

7. For the last rolling, turn the packet 90 degrees to the left and roll out the dough to an 18-by-21-inch rectangle, with the shorter side facing you. Spread the remaining butter over the entire surface.

8. Using the spatula as an aid, lift the edge closest to you and roll the dough away from you into a tight log, brushing the excess flour from the underside as you go. Trim the ends and cut the log in half. Wrap each piece in plastic wrap and chill for 2 hours or preferably overnight.

9. Now make the custard. In a medium bowl, whisk the flour and ¼ cup of the milk until smooth. Set aside.

10. Bring the sugar, cinnamon, and water to a boil in a small saucepan and cook until an instant-read thermometer registers 220°F (100°C). Do not stir.

11. Meanwhile, in another small saucepan, scald the remaining 1 cup milk. Whisk the hot milk into the flour mixture.

12. Remove the cinnamon stick then pour the sugar syrup in a thin stream into the hot milk-and-flour mixture, whisking briskly. Add the vanilla and stir for a minute until very warm but not hot. Whisk in the yolks, strain the mixture into a bowl, cover with plastic wrap, and set aside.

13. Assemble and bake the pastries

14. Heat the oven to 550°F (290°C) with two baking stones inside for at least one hour. Remove the pastry from the refrigerator and roll it gently back and forth on lightly floured work surface until it’s about an inch in diameter and 15 inches long. Cut it into scant 1.25-inch pieces. Place the dough pieces cut-side down into each of the the 12 cups of the 12-cup aluminum muffin pan (each cup measuring about 2.5" by 1.5"). Let the dough pieces often several minutes until they become soft and pliable.

15. Dip your thumbs into the water, then press straight down into the middle of the dough piece. Flatten it against the bottom of the cup to a thickness of about ⅛ inch, then smooth the dough up the sides and create a raised lip about ⅛ inch above the pan. The pastry sides should be thinner than the bottom.

16. Fill each cup ¾ full with the slightly warm custard. Bake the tarts until the edges of the dough are frilled and brown, about 10-12 minutes.

17. Remove from the oven and allow the tarts to cool a few minutes in the pan, then transfer to a rack and cool until just warm. Repeat the steps with the remaining dough and custard mix.

18. Serve and enjoy. Optionally, sprinkle the tarts generously with powdered sugar, then cinnamon before serving.