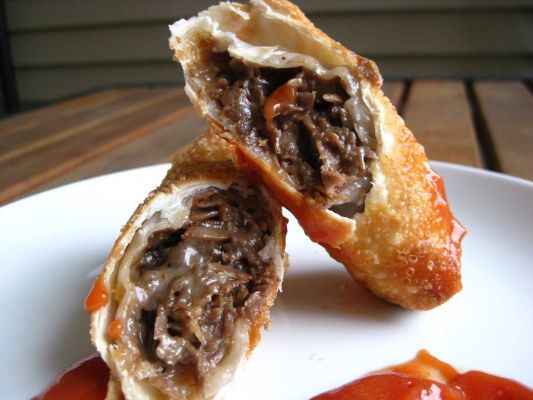 This is a very tasty appetizer I had during my time in Alaska. Can you believe that? Philly CheeseSteak Eggrolls in Alaska.

Place steak pieces on large plate or baking sheet and freeze until very firm, usually about an 1 hour.

In a in 12-inch nonstick skillet, heat 1 tablespoon vegetable oil over medium-high heat.

Add onion and pepper, and cook, stirring often, until softened; about 5 minutes.

Using sharp knife, shave steak pieces as thinly as possible against grain. Mound meat on cutting board and chop coarsely with knife 10 to 20 times.

Heat 1 tablespoon of oil in 12-inch nonstick skillet over high heat until smoking.

Add half of meat in even layer and cook without stirring until well browned on 1 side, 4 to 5 minutes.

Stir and continue to cook until meat is no longer pink about 1 to 2 minutes. Transfer meat to colander set in large bowl.

Wipe out skillet with paper towel.

Reduce heat to low, return meat to skillet, and stir in onion mixture, salt and pepper.

Sprinkle with Parmesan, and single slices of American cheese over meat. Allow cheeses to melt, about 2 minutes.

Transfer mixture to a large bowl.

In a small bowl, combine flour and 2 tablespoons water in a bowl until it forms a paste.

Lay one egg roll wrapper with the corner pointed toward you.

Place 1/3 cup of the mixture on egg roll wrapper.

Fold corner up over the mixture.

Fold left and right corners toward the center and continue to roll.

Brush a bit of the flour paste on the final corner to help seal the egg roll.

Place egg rolls on prepared baking sheet and brush each one sparingly with vegetable oil.

Bake for 10 minutes, then flip egg rolls over using tongs. Bake for an additional 5 to 6 minutes, until egg rolls are nicely browned on both sides.

Transfer egg rolls to paper towel-lined plate to absorb any oil before serving.

Serve with sweet chili sauce or honey mustard for dipping.