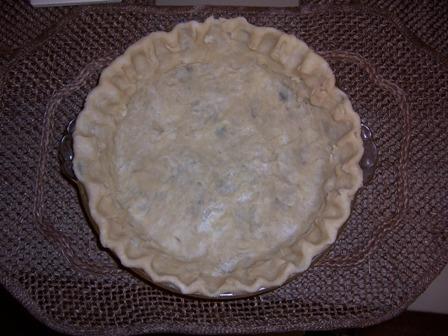 This is a basic pie dough that only uses butter. The dough is a bit squirrelly to deal with, but it has a superior flavor. If all else fails, chill it completely and just press it evenly into the pie plate rather than rolling it out.

Makes 1 9 inch pie crust. Can be doubled to make two for a covered pie.

If pre-baking, preheat oven to 400 degrees. Chill the dough in the pan for at least 30 minutes. Prick the bottom of the crust all over with a fork, then weigh the dough down with dried beans and cover the edges with aluminum foil. Bake for 25 minutes, then remove foil and bake for another five minutes. Allow crust to cool completely and remove beans before adding any fillings.

Mix together the flour, sugar, and salt.

With a pastry cutter, quickly cut in 8 tablespoons of the butter into the flour mixture until the butter is approximately pea-sized.

If the dough starts to form balls that stick together when pressed, the dough is moist enough, otherwise add up to another 2 tablespoons of ice water.

Press the dough with your hands into a disk, wrap tightly in plastic, and chill for at least half an hour and up to 2 days.

After chilling, pull out the dough and place it on a lightly floured surface.

Roll from the center out until the dough is approximately 3 inches wider all the way around than the pan.

Gently roll the dough around the rolling pin (making sure there is enough flour to prevent sticking) and transfer the dough to the pie pan. Press it in place and crimp or flute the edges.