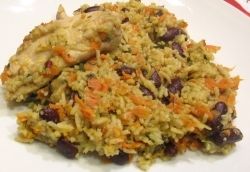 The basic definition of a pilaf is rice cooked in a meat broth. When done right, the meat gives the rice a savory flavor that can be more addictive than potato chips. This dish is very versatile and can be made with any type of meat or poultry, as well as nearly any vegetables or beans. The history of pilaf goes back thousands of years back to ancient Persia, and in fact, the word “pilaf” is Persian in origin. From Persia, this dish spread throughout Middle East and Central Asia, becoming very popular in Turkey and in the former Soviet states of Uzbekistan, Azerbaijan, and Armenia. Pilaf is considered the national dish of Azerbaijan. Once the latter three states became a part of the Soviet Union, their cuisines spread throughout Russia and the rest of the former Soviet states the way cuisine tends to do. These days, a book on Russian-style food would be incomplete without “plov”, which is Russian for rice pilaf.

This recipe is best made in either a thick-walled sauce pan or a Dutch oven with at least a 3 quart capacity.

• Slice the onions into thin half-rings.

• Heat the oil in a deep frying pan or a thick-walled Dutch oven for 2-3 minutes and add the onions and garlic.

• While the onions are sauteing, coarsely shred the carrots in either a manual grater or a food processor. Add to the pot together with the chicken.

• When chicken is nearly done after about 15-20 minutes (no pink color should be visible when you cut into the chicken), add rice and water. Since the water and rice need to be at a 2:1 ratio, use slightly less than the specified 2 cups of water if there is liquid in the pot.

• Cook on low heat and mix every 10-15 minutes to prevent scorching.

• The rice is done when all the water becomes absorbed in another 20-30 minutes. When this happens, season with salt, pepper, and the chopped herbs.