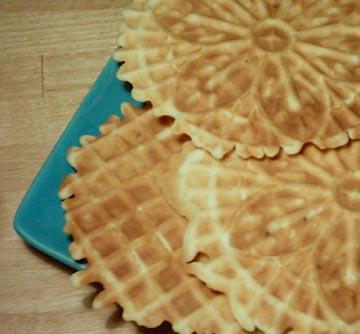 Pizzelles are Christmas. They always have been in my family. They are a traditional Italian recipe - not quite a pastry, not quite a waffle - crispy and mellow with a nice aromatic anise flavor. A recent Pantry discussion led me to post my recipe. A word of note: making pizzelles require a special pizzelle iron. If you have one and you're going to try this recipe, be sure to look at my notes at the end for some clarification.

Sift together baking powder and flour. Add to the egg/butter mixture, in batches, until the batter is thick and nearly the consistency of pastry icing. You may not need all of the flour mixture. This can be made up to two hours ahead of time.

Preheat the iron according to the manufacturer's instructions. Each iron is slightly different, so please refer to the manual for proper use. What follows is a general guideline for making the pizzelles, based on my iron.

Once the iron is preheated, brush both plates with a thin coat of butter; you will only need to do this once, at the beginning of the process. Place a scant tablespoon (or a generous teaspoon) of batter in the center of each pizzelle mold, then close the iron and latch the handle. Cooking times vary according to iron and personal taste; I usually go about 60 second for each, since I like my pizzelles a nice toasty color. Once cooked to your desired state, open the iron and remove the pizzelles with a wide spatula to a cooling rack or brown paper for cooling.

Store in tins or a large box, placing wax paper between layers. Pizzelles should sit for a while to develop flavor, up to two weeks.

Serve as is, or dust with powdered sugar, or dip in chocolate.

A FEW NOTES - First, it's important to pay attention to your pizzelle iron's manual, since each manufacturer has different standards. What I've put here is great for me, but your iron may differ considerably. And be conscious of the fact that, like a waffle iron, there's no on/off switch. If it's plugged in, it's very hot, and you could burn yourself if you're not careful.

I've tried several variations on the recipe, and this is the best all-purpose recipe I've found. This is, ironically, the first recipe I've ever tried – my old family recipe. Other variations call for less eggs, more flour, etc... but they're just not as good, as far as I'm concerned.

I think my grandmother used to make them with oil instead of butter, but where's the fun in that? Also, you can use different flavored extracts to make different flavored pizzelles – vanilla, almond, lemon or orange are often popular. But if you have even a hint of Italian genes in you, anise is the only way to go.

Making pizzelles isn't hard, but it is time-intensive. The batter comes together in a snap and you can make it ahead of time, but once you plug the iron in, there's no walking away from it until every last scoop of batter is used up, so plan accordingly. As far as dropping the batter onto the iron is concerned, I usually use two spoons. And I tend to drop the batter just off center, towards the iron's hinge, since when you close the iron's lid it'll push the batter forward slightly. You'll just have to play around to find the right amount of batter for your iron, but you'll know by the time you make your third batch. Also, I don't have a ton of counter space in my kitchen, so I set up a card table and line it with cut up brown paper bags – it's the best way to cool the pizzelles, I think.

And finally, once you've made them... wait. Trust me. They don't have that much flavor hot off the press; you really need to give them about a week, set aside in a cool, dark place, for the flavor to develop. Some recipes say that you should keep them sealed in an airtight tin, but I never do that. I keep them in a box, with wax paper between each layer. The way I see it, if you keep them sealed up, the residual moisture in the air will make them spongy; in a closed box, there’s just enough airflow to keep them crispy (yes, crispy, not stale).

jasonlawrencesimmons
Never heard of pizzelles before. Saving this one for Christmas!
Darcy25
Nearly christmas getting some recipes, have bookmarked this for future eating
queenietwo
Jason - if the photo is of the pizzelles that you have made then yours end up like mine. I can never get them right to the edge no matter how hard I try or I go over the edge. They do look good though.
Marlene