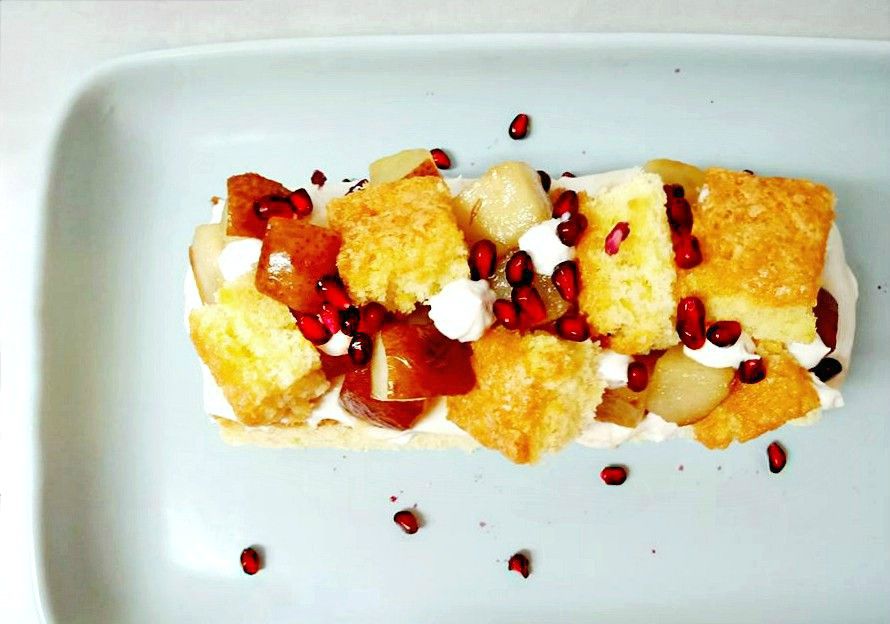 "Having both Pears and Pomegranates sitting in the fridge got me thinking... maybe, just maybe, I can translate the flavours of my favourite salad... into a cake?"

Pomegranate and Pear is a combo that I usually utilize for salads, (they do make for a kick ass salad) but I had Pears that were literally months old and just weren't ripening! Poaching them was the only way to salvage these stubborn buggers, and so it got me thinking... maybe, just maybe, I can translate the flavours of my favourite salad... into a cake?

Preheat your oven to 160 degrees Celsius

Grease and line the base of a 20cm diameter non-stick spring form tin.
Don't grease the edges, this may go against every baking instinct you have.... but to get the maximum rise from your cake, it needs to be able to grip the sides a little.

Separate your eggs, place your yolks in one mixing bowl, the whites in another and 1/3 a cup of sugar in with each.

Beat your egg whites on high speed with an electric mixer until it holds soft peaks and is of a meringue texture (smooth, glossy, and thick).

Beat your egg yolks on high speed with an electric mixer until egg yolks have doubled in size.

Into a separate bowl, sift together your self-raising flour, cornflour, and cream of tartar.

Pour egg yolks into your whites and sift your dry ingredients for a second time into the bowl on top.

Fold together gently with a spatula until well combined.

Pour mixture into pre-prepared tin. Avoid filling your cake tin more than half way, or you risk it spilling over in the oven.

Place in your preheated oven for 25 minutes or until a skewer inserted into the centre of your cake is removed clean.
Place cake in the refrigerator to cool.

Place 1/2 cup water and 1tbsp caster sugar into a small saucepan, and place over a low heat.

Toss your pears through the liquid and allow to simmer until the pears are soft and the liquid has thickened slightly, roughly 10 - 15 minutes. Set aside to cool.

NOTE: If your liquid goes too far and solidifies into a toffee like texture, add a tablespoon of water and return to heat for a few seconds, toss around your pears and it should right itself.

Once your cake has cooled completely, you can start working on your whipped cream icing.

Place the seeds of half a pomegranate into a food processor and blits until it forms a thick paste (the seed centres will remain whole).

Place a Siv over a medium sized mixing bowl, and place your pomegranate paste into the Siv.
Set aside, allowing the pomegranate juice to drip into the bow

Retrieve your bowl from underneath your siv, and add 300ml cream and 1/2 a cup of icing sugar, and beat together on high with electric beaters until cream hold stiff peaks.
Set aside.

Place 1/4 cup of Chardonnay and 2 tsp sugar into a saucepan over a medium heat.

Allow to simmer softly until the sugar has dissolved into the Chardonnay (roughly 5 minutes)
Remove from the heat and set aide.

Retrieve your cake from the fridge, carefully slice the top 1cm off your cake.

Pour your Chardonnay over your separated cake top and set aside for a moment to soak in.

Apply a layer of Pomegranate cream on top of the bottom slice of cake. (save some for decoration on top)
Arrange sponge cubes and pears on top of your cream, pipe small dots of cream on top and sprinkle with whole pomegranate seeds.

babs
WOW!!! This looks delicious and fresh - would look nice on any table.