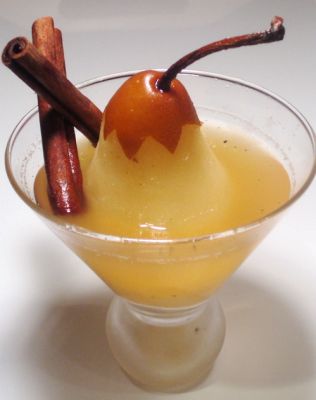 I had to find a recipe that used sauvignon blanc as part of the Wine Pairing and Virtual Tasting assignment for this month. I didn't want to make the typical white sauce over chicken...dessert sounded more fun. So this is what I found

You want to be careful when peeling....so you can preserve the pears shape as much as possible

Remove the core from the bottom of each pear.

Cut the orange zest into strips. Now....this was new to me. Every time I've zested an orange...it was with a grater. This process required me to sorta gently cut the zest away without the white stuff. So I used a knife and thinly "peeled" the orange. I ended up with some pith still attached but not too much.

Combine everything in a large pot

Over a medium heat, bring liquid to a boil, then reduce to a simmer. Allow to simmer until pears are done. Which I think would mean, tender yet firm. The time frame can vary, depending on ripeness...5 - 15 minutes.

Since bosc pears are general a very firm pear (which is why I chose them for this recipe) I let them cook a bit longer.

With a large slotted spoon, remove the pears and place in a bowl. Remove all the seasonings and discard. At this point, I allowed the liquid to simmer a bit longer to get more of a syrup consistency which didn't happen.....I was afraid the flavors would end up...I dunno...overcooked. Have you ever smelled cinnamon and citrus that's overcooked? Maybe in a potpourri? Well, i didn't want my syrup to taste like that.