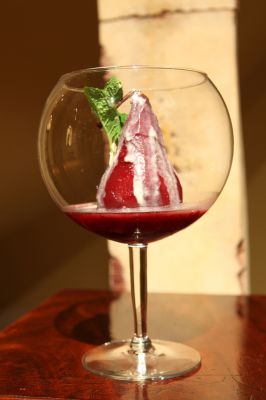 In a saucepan, combine the wine, lemon juice, the vanilla bean, sugar and about 2 cups of water. Cover and cook until the sugar has dissolved.

In another pan, blanch the pears for a couple of minutes, and then drop into cold water. Peel the skins gently with a small paring knife, leaving the stems. Set the pears upright in wine syrup and simmer until they are just tender. Remove them from the pot carefully so they don't bruise. Place them in a pyrex dish and refrigerate.

Then turn the heat up and boil the syrup until it is reduced by half. Let it cool to room temperature and spoon it over the pears, basting often. The syrup will deepen the color of the pears. In spring, you may want them to remain a lighter red. At Christmas, I leave the pears in the syrup for a longer period of time, until they become almost burgundy in color.