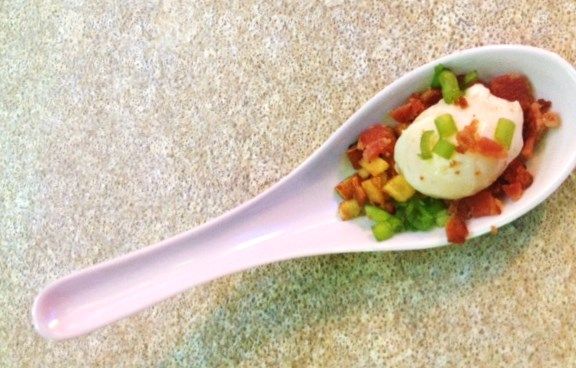 I'm so proud of this recipe! After poaching dozens of quail's eggs I finally got the flavor combo that I wanted. I had envisioned breakfast in a spoon; bacon, egg and potato - and I think this is it! A perfect Amuse Bouche! Everyone in class loved it and we poached the hell out of those cute little eggs!

* See below for the bruniose and Beurre Monté

Cook the bacon until crisp. Drain on a paper towel, the finely chop. Set aside.

Cut the potato, bruniose style. Blanch in boiling water for about 60 seconds. Drain.

In a small skillet over medium heat, heat 1 Tablespoon of Beurre Monté or butter and cook the potatoes until crisp and browned. Remove from pan; Stir in 3/4 of the chives. Set aside or hold in a warm oven.

Using a serrated knife cut through the top part (the fat end — about 1/4 the way down) of each quail egg and place the eggs into a glass bowl. Bring a deep pan with about 4-6 inches of water and 1-2 teaspoons of white vinegar, to a high simmer.

Using a whisk, get the water swirling rapidly as you slide the eggs into the water. Do not stir; just let them cook for about 30 seconds. They should float up to the surface. When they do, test by picking up a few with a slotted spoon and by pushing against the yolk with your finger. It should be soft.

If eggs are done either serve immediately or transfer to a strainer which is set into bowl of the ice water to stop the cooking. Using your fingers or scissors, cut off the tail end and place eggs on a towel lined plate. At this point they can be refrigerated until ready to use.

Throw the potatoes back into the pan to re-warm (if necessary) and then wipe out the skillet and put about 1 Tablespoon of Beurre Monté or butter in the pan and re-warm the eggs by gently tossing, about 30-60 seconds.

To plate: Divide the potato amongst eight spoons. Divide 3/4 of the bacon amongst the eight spoons and top with one poached egg. Top with remaining 1/4 bacon and the remaining chives. Serve immediately.

Brunoise is a precision cut where the food is first julienned (cut into thin match sticks), then turned a quarter turn and diced again, producing tiny cubes with equal sides (about 1/8”).

This cut is mostly used as a garnish for Amuse Bouche, soups or for fine salsas. Ingredients of various colors are most commonly used in a brunoise mix to create a striking effect. This cut can be used on any vegetable, but it is significantly easier (and neater) when using firm ingredients such as onion, tomato, carrot, celery, parsnips, turnips and peppers.

Beurre Monté, also known as “Magic Butter”, is a method of melting butter while maintaining the emulsification.

Anywhere from 1 Tablespoon to 1 pound of butter

Bring the water to a boil; reduce the heat to low and begin whisking the butter into the water, bit by bit to emulsify.

Once you have established the emulsion you can continue to add pieces of butter until you have the quantity of Beurre Monté that you need. It is important to keep the level of heat gentle and consistent in order to maintain the emulsification.

Beurre Monté can be held warm or refrigerated and reheated to use as melted butter or it can be clarified.