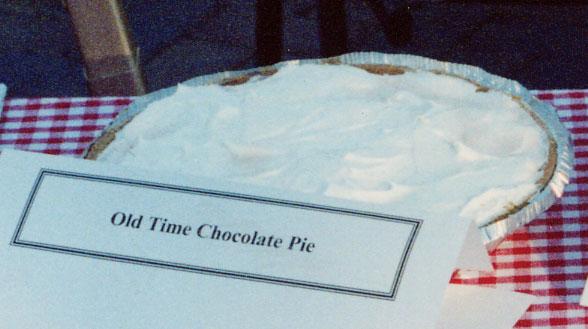 recipe is an ideal example of how traditional the ingredients and methods used in family recipes can give way to modern convenience. The first problem she confronted was deciding which traditional baked good she would bake. Mrs. Suddeth wrote, "In the old days we would just bake it ourselves, but now it's there for us to buy. . . I was tempted just to call Mike McGee at McGee's Bakery and ask him to bake up something nice." Eventually, Mrs. Suddeth decided to bake an adapted version of her mother's Chocolate Pie. The recipe replaces traditional ingredients with modern ones like Cool Whip and instant pudding. Mrs. Suddeth, however, feels that "They didn't have the new stuff in the old days, and she made it from scratch, but it's the same kind of pie my mother made."

Pour melted butter over the crumbs and pack into shell.

Refrigerate to harden the crust.

Add remaining Cool Whip to top of pie and refrigerate.