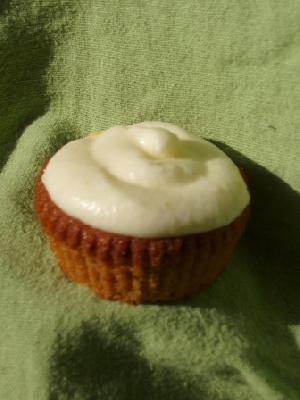 I have been planning these for some time as many of you know, but something always got in the way and blocked me from producing them. It started to drive me crazy, but all the wait was worth it in the end. This is a bright, dense, seasonal cupcake full of pop! I decided to call this particular cupcake combo a Penelope, after a friend of mine. Penelope is bright, bubbly, full of spark and always has a smile. Biting into this cupcake an image of her popped into my head and thought that she would truly adore this tasty treat. Its flavors seemed to mimic her personality. Hence, the naming of the Penelope.

I had Rob help me make this one, as my gimp foot kinda prevented me from really hopping all over the kitchen and since I aggravated it during the farmer's market run. Yep, the boy bakes too. You should taste his chocolate bread pudding made with (gasp!) croissants.

Pomegranate molasses gives a bit of squat and density to this cupcake, but it's worth that subtle acidy bite in the back. It's also an ingredient I plan to keep on hand from now on. The acidy cake is amazingly tasty! The cakes were each brushed with a bit of pom juice as well, so each bite brings a lush surprise of flavor.

The frosting was really killing me in the development of this cupcake. At first I went with the idea of lemon, but it seemed to sour and tart. I also knew cream cheese was the way to go, but wanted to avoid that tang, so we moved into a mascarpone cheese instead (Rob's idea), giving this frosting a velvety texture. However, if cream cheese is what you have on hand, I have realized that would work amazing too. It's a matter of taste on that one. As for the tangerine? Sadly I have to thank Starbucks on that, I saw tangerine tea and pom tea drinks and realized that tangerine would really be the bright counterpart I needed.

It's rich, flavorful, and has a sharp bite to it! Hope that you all enjoy this cupcake as much as I do.

1) Beat butter until soft for about 30 seconds. Add the sugar and beat until fluffy, about 2 minutes on medium-high.

2) Add the eggs until combined

4) Fold in the pomegranate molasses. Scoop into cupcake papers, about 3/4 full.

5) Bake undisturbed for 15 minutes, then rotate the pan and bake an additional 3-5 minutes or until a cake tester comes out clean.

Move to a wire rack and let cool.