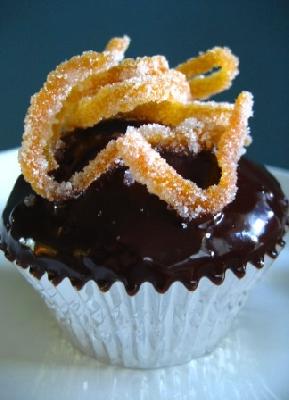 I named this a Port Royal because 1) it sounded like a refined name for a very fashionable, delicate, and august cupcake; and 2) I have been watching Pirates of the Caribbean like I'll win a prize.

Honestly, this flavor combo was a total crapshoot. I had seen the combo before but never tried it, but was always fascinated by it. Chocolate, star anise, and grapefruit. Who knew? Seriously, who on earth thought of pairing this one together, cause I never would have. The flavors really do compliment each other, yet each one stands out as an individual. Unless you like star anise, you will not like this cupcake. If you appreciate it's slightly licorice flavor, and the tang of grapefruit then this is the cupcake for you. Really though the flavors are very delicate, and I would almost call this cupcake elitist in its taste.

It is a bit of task making it, mainly cause some of the prep work means you need to start the night before, but ah well. I made these to thank a group of good people for meeting me at the Sacramento Food Bank to do some volunteer work (will post on that later).

This will be the last chocolate cupcake for a while. In Northern California, Winter has pretty much passed and Spring is making it's quick appearance before Summer comes in beating my door down. I yearn to work with lighter, brighter ingredients; rhubarb, limes, teas, and stone fruit call out to me.

Also, good chocolate can get pricey, and I have a deposit to make on my new apartment.

Chocolate Cupcakes: Chop chocolate and transfer into the bowl of a standing mixer.

Add butter to the chocolate and place the bowl over a pan of simmering water. Stir until chocolate melts and butter is combined.

Remove from heat and stir in sugar. Let mixture cool for 10 minutes.

Beat in an electric mixer for 3 minutes.

Add one egg at a time, mixing for 30 seconds between each

Sift the flour, cocoa powder, baking powder, and a pinch of salt into the mixture and mix until blended.

Scoop into cupcake cups and bake at 350 F for 25 minutes or until a toothpick comes out clean. Rotate pan after first 15 minutes for even baking.

Candied Grapefruit Peel: Zest the peel into long strips with a citrus zester. (You can cut off the zest as well, then cut into strips, just be sure to scrape off all of the white pith as it's nasty bitter.) Add salt and peel to 4 cups of water and let stand overnight.

Drain and rinse. Place in a saucepan and cover with cold water. Heat to boiling and then drain. Repeat 3 times (this is to remove any bitter taste).

In sauce pan, combine peel, sugar and 1/2 cup water. Heat and stir until sugar dissolves. Continue to cook until peel is translucent. Drain any liquid and roll peel in granulated sugar. Allow to dry.

Star Anise Chocolate Ganache: Prep the night before. Place the cream and anise in a bowl, and let sit overnight.

Break up the chocolate and place in a heat proof bowl.

Heat the cream and anise in a saucepan and heat at medium high until small bubble form on the rim. Pour through a mesh sieve to catch the anise as it pours over the chocolate. Let sit for one minute.

Mix together. Let cool a bit. Dip and swirl the cupcakes domes into the ganache. Shake off the excess. Decorate with the grapefruit zest and let stand to dry.