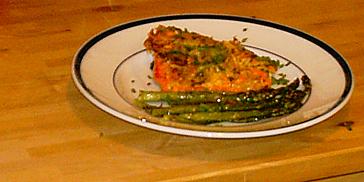 Somewhere in your kitchen, lurking, are the makings of a quick-yet-fancy meal. This recipe has a nice balance of luscious fish/crispy crust/spicy herbal notes. And you probably already have all of these ingredients.

Heat oil in a 12 oven-proof skillet over medium heat.

Place grated potato on a clean kitchen towel or double-layered piece of cheesecloth; gather up the edges of the towel and squeeze grated potato to remove excess moisture.

With skin-side up, spread a thick, even layer of Dijon mustard on each fillet.

Place a handful of grated potato on each fillet, spread to cover, and press down to make the potato adhere to the Dijon mustard.

Sprinkle again with salt and pepper to taste.

4. Place the salmon fillets potato-side down in the skillet.

Cook until potato crust sets up and begins to pull away from the skillet, about five minutes. Using a thin spatula, work your way underneath the salmon fillets and carefully flip over, skin-side down.

If you are prepping ahead of time, the potato can be grated and placed into a container of cold water up to 2 hours ahead of time.

This will prevent the potato from turning brown and developing off flavors, but it will also remove much of the excess starch in the potato that is useful in making a hash-brown-crisp crust.

If using this method, watch the fillets carefully while on the stove top to make sure the potatoes aren’t burning or sticking.

But don't fuss with them - if you keep trying to move the fillets, you'll wind up with a soggy, torn mess.

You want to use russets, as their high-starch content will make for a better crust.

Thicker fillets are better here, as they will be less likely to dry out.

This is a very fast-cooking recipe, but because you’re looking for the potatoes to get crisp, it requires a fairly high heat.

The skin acts as a barrier between the hot pan and the fish while in the oven.

When removing the fish from the pan, the skin will most likely stick; just slide the fillet off of it and serve without the skin.

Toss some asparagus in a little bit of olive oil, spread on a sheet pan, and pop them into the 450F oven for 8 minutes or so right before you put the fish into the skillet.

Pull them out when you put the fish into the oven.

Instant side dish with virtually no effort.

berngirl
In step 3 did you mean skin side down? Otherwise the recipe makes no sense???
pattit
Another great recipe, thank you so much. I can't wait to try this. One of my favorite meals at a restaurant that is no longer around was their potato encrusted fish, mmmm this will be even better because it is made with salmon. yummy!