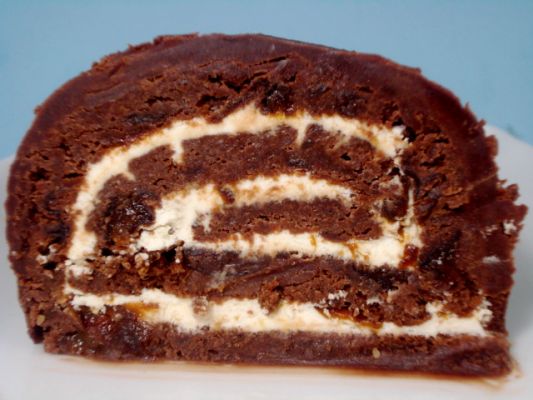 The famous Dorie Greenspan was fired over tinkering with her restaurant's prized whisky-soaked raisin chocolate cake and adding the famous French combination of prunes and Armagnac. I think we are all the better for it, because it produced a deliciously fudge-y, not too boozy chocolate cake! Here, I added a prune and armagnac buttercream and turned it into a Chocolate Roll!

rom Baking from my Home to Yours by Dorie Greenspan

Getting ready: Center a rack in the oven and preheat the oven to 350 degrees F. Line a jelly roll pan with parchment paper or a silpat mat.

To make the cake: Whisk together the nuts, flour and salt.

Put the prunes and 1/4 cup of the water in a small saucepan over medium heat and cook, being careful not to scorch the fruit, until the water almost evaporates. Pull the pan from the heat and pour in the Armagnac, stand back and set it aflame. When the flame dies out, transfer the fruit and any remaining liquid to a bowl and let cool. (If it’s more convenient, you can flame and steep the prunes up to 1 day ahead. Pack the prunes and their liquid in a covered jar and keep at room temperature.)

In a large bowl, whisk the egg yolks and sugar together until thick and pale, about 2 minutes. Switch to a rubber spatula and, one by one, stir in the chocolate and butter mixture, the nut mixture, and the prunes with any liquid.

Working with a stand mixer fitted with the whisk attachment or with a hand mixer in a large bowl, beat the egg whites until they hold firm, glossy peaks. Stir about one quarter of the beaten whites into the chocolate mixture, then gently fold in the remaining whites. Turn the batter into the pan.

Bake the cake for 12-14 minutes, or until it is puffed, firm on top and starting to come ever so slightly away from the sides of the pan; Transfer the cake to a rack and let it cool.

Heat prunes and water until water is almost evaporated. Remove from heat and add Armagnac. Standing back, light the Armagnac with a match. When the flames die out, put prunes and liquid in a bowl and let cool.

Combine 1/3 cup water and 1 1/2 cups of the sugar in a small saucepan and cook over medium heat until it reaches 250° on a candy thermometer. Put egg whites in the clean bowl of a standing mixer and whisk on medium-low speed for 2 minutes. Increase speed to medium and whisk whites to soft peaks, about 1 1/2 minutes. Gradually add remaining 1/2 cup sugar while continuing to whisk, then increase speed to medium-high and whisk until whites form stiff peaks, about 2 minutes. Carefully pour syrup into whites, whisking until cool, about 10 minutes. Add butter, bit by bit, whisking constantly until buttercream is shiny and fluffy, about 8 minutes. (Mixture may curdle, but will eventually come together.)

Using half of the buttercream, mix in prunes and any remaining liquid.

Once the cake has cooled, spread with the buttercream and then gently roll the cake, peeling off the parchment paper as you roll.

Getting ready to glaze: If the cake has crowned, use a long serrated knife and a gentle sawing motion to even the top. Turn the cake over onto a cooling rack—you want the very flat bottom of the cake to be the top. Put a piece of wax paper or foil under the cooling rack to serve as a drip catcher.

To make the glaze: Melt the chocolate in a heatproof bowl over a pan of gently simmering water, or in a microwave oven. Remove it from the heat and, using a small spatula, stir in the sugar, then the butter, a bit at a time, stirring until you have a smooth glaze.

Have a long metal icing spatula at hand. Pour the glaze over the top of the cake, allowing the excess to rundown the sides, and use the spatula to smooth the top of the cake if necessary—usually the glaze is a self-spreader—and to even it around the sides of the cake. Let the glaze set at room temperature or, if you want to speed it up, slide the cake into the refrigerator for about 20 minutes. If you’d like the glaze to be more like a frosting, let it cool until it is thick enough to spread, then swirl it over the cake.

Cover and chill the cake until ready to serve, at least 1 hour.

krisTJ
This looks and sounds wonderful. I love the combination of the prunes with the chocolate and when you put it in a roll you get yum in every bite.
jamie
What an interesting combination - thanks for posting
mortigo
I love the fact you made it a roll cake. Great job. Looks yummy!