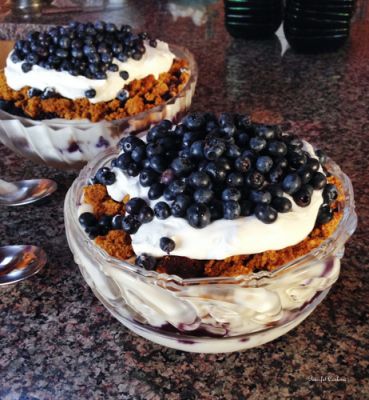 Recipe by Erika Kerekes for the U.S. Highbush Blueberry Council

Note: Trifle can also be made in small glasses for individual servings

Make the pumpkin bread: Preheat the oven to 350 degrees F. In a large bowl, whisk together the pumpkin puree, eggs, oil, 2 cups sugar, vanilla, cinnamon, nutmeg, allspice, and cloves. Sprinkle the salt, flour, baking powder, and baking soda on top of the pumpkin mixture, then stir with a large spoon just until combined. Spray a 9-by-13-inch baking pan with nonstick cooking spray and pour in the batter. Bake about 40 minutes or until a toothpick comes out clean. Let cool, then crumble the pumpkin bread into large chunks with your fingers. (Alternatively, you can buy a large loaf of prepared pumpkin bread.)

Make the blueberry sauce: Put the frozen blueberries, remaining ½ cup sugar, lemon juice, and lemon zest into a saucepan. Bring to a boil, turn down the heat, and simmer about 1 hour, until the sauce is thickened and glossy. Remove from the heat and let cool.

Just before assembling the trifle, whip the cream with an electric mixer (or by hand if you’re sturdy) until it is fluffy and glossy.

Assemble the trifle: In a large glass bowl, put down a layer of pumpkin bread crumbs, a layer of pudding, and a layer of blueberry sauce. Repeat once more, ending with a layer of crumbs. Pile the whipped cream on top and scatter the fresh blueberries on the whipped cream. Let sit at least 2 hours before serving to give everything a chance to meld.

vuonrautaigia
It's was very useful