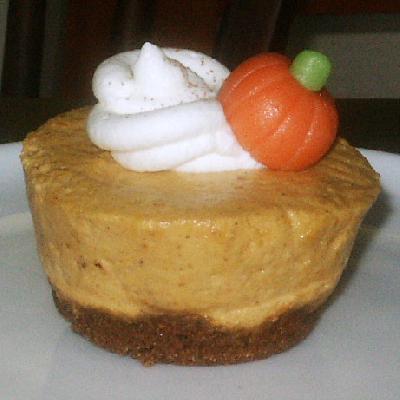 Recipe excerpted from my blog:

For this cuppin' cake, I wanted to reinvent Gourmet Magazine's Pumpkin Chiffon Mouse. It had been on my mind since I saw a similar recipe in Martha Stewart magazine at my mom's house in San Diego. A housewarming party in Sacramento this weekend became the perfect excuse to make this delicious dessert.

What a delicious fall treat! The pumpkin chiffon was light and flavorful. The gingersnap crust was both spicy and buttery. The whipped bourbon cream made it a sinful indulgence. These cuppin' cakes were a success. As the party crawled into the early morning hours. the cupcakes disappeared one by one. I'm not sure they soaked up any alcohol, but the drunker the guest became, the more effusive the comments did as well. I'll take it! Recipes below.

*A quick note: I only used one cupcake tin (one dozen crusts) to make this recipe. I quickly found out, though, that I had enough filling for two dozen cupcakes. The solution? Prepare two batches of the gingersnap crust, and bake off the batches in two different cupcake tins - at the same time. That way, you'll have two sets of crust ready to go when you start to fill them with mouse.

To prepare pumpkin chiffon mousse, sprinkle gelatin over bourbon in a small bowl and let soften.

Beat together yolks and brown sugar with an electric mixer at high speed until thick and pale, 3 to 5 minutes.

Reduce speed to moderate and mix in pumpkin, spices, and salt.

Transfer pumpkin mixture to a 4-quart heavy saucepan and cook over moderate heat, stirring constantly, until it registers160°F on a candy or instant-read thermometer, about 6 minutes.

Transfer to a large metal bowl set in a larger bowl of ice and cold water and cool, stirring occasionally, until the consistency of raw egg whites, about 15 minutes.

Beat cream in another bowl with cleaned beaters until it just holds stiff peaks, then fold into pumpkin mixture gently but thoroughly.

Spoon pumpkin chiffon mouse on top of cooled gingersnap crust (fill all the way to the brim). Even out tops with a knife.

Chill in refrigerator one hour, uncovered.

Cover with saran wrap and chill for an additional three hours (at the very least).

Using a paring knife, run the knife along the edges of the cupcake. You can either invert the cupcake onto a platter (this can get messy), or you can very gently inch your pairing knife under the crust a lift up.

If the cupcake gets too soft, put into freezer for a few minutes. The harder the cupcake, the easier to get it out of the mold.

Pipe bourbon whipped cream in the center of the cupcake.

chrgrly89
Aw too cute! And yummy looking. BTW, your blog looks great and I''m adding it to my favorites. I just started my own blog (mysweetestday.blogspot.com) so I hope you'll check it out! :)
girlieerin
That looks absolutely adorable! Love the tiny pumpkin candy accent.