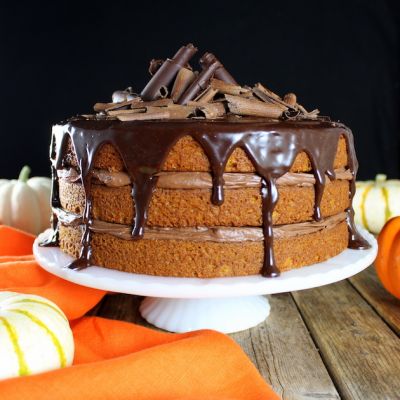 Pumpkin Chocolate Ganache Cake – semi-sweet chocolate, pumpkin puree, cinnamon, and spices all layered together in one delectable cake. Topped off with chocolate curls… beautiful AND scrumptious!

For The Chocolate Curls:
One small block of semi-sweet chocolate, approximately 4 ounces
One wooden skewer

For The Cake:
Preheat oven to 325 degrees.
Add all dry ingredients except for the sugar into a mixing bowl, and set aside.
Slowly beat butter and sugar together. Then add pumpkin puree, vanilla extract, oil and mix in completely. While the mixer is running slowly add one egg at a time until mixed thoroughly.
Slowly add dry ingredients about a cup at a time, scraping down the sides of the mixing bowl as you go.
Divide the mixture into three greased 9-inch round baking pans and bake on 325 for 30-35 minutes. Insert a toothpick or non-serrated knife to the center to check for doneness. If toothpick comes out clean or with crumbs it’s done.
Let the cakes cool for at least an hour before frosting - or if making ahead wrap in plastic wrap and refrigerate.

For The Chocolate Frosting Layers:
Heat 1/2 cup heavy cream until it reaches a simmer.
Remove from the heat and pour the hot cream into a large (heat-tolerant) glass mixing bowl with chocolate chips, then let it stand for 2 minutes. If the chips don’t fully melt, you can microwave for about 15 seconds.
Whisk the chocolate and cream by hand until it is smooth, then let it cool for 15 minutes. Transfer to an electric mixer and beat on high speed until frosting begins to thicken.
Add the remaining 2 tablespoons of cream and beat on high speed until stiff peaks form… usually another 3 minutes.
Place the first layer of cake on a serving platter. Add about half the frosting to the center, and spread a nice thick layer evenly over the entire cake top. Repeat the same step again with the next layer of cake, using the other half of the frosting mixture. Then add the third pumpkin cake layer on top but do not frost the third layer.
Refrigerate the cake for 30 minutes before adding the ganache.

For The Ganache:
Place chocolate chips into medium bowl and set aside. Heat cream in a saucepan over medium-high heat just until it starts to simmer. Remove from heat and pour over chocolate.
Let sit for about 2 minutes and whisk until chocolate is completely melted and smooth, then whisk in corn syrup.
Let cool for about 10-15 minutes until ganache has thickened slightly. You want to be able to pour a spoonful at the top edge of the cake making drips of different sizes and lengths. (If it’s too warm the chocolate will run down the cake in thin strands and pool on the cake plate rather than sticking to the cake. You can test the ganache by pouring some down the top edge of an inverted glass Pyrex measuring cup.)
Pour a small spoonful of ganache at the top edge of the cake, gently nudging it over the edge so that it runs down. Create longer and shorter drips by using more or less chocolate in each spoonful, which will gave the cake a more natural and organic look.
Use the remaining ganache to cover the top of the cake, working from the center toward the edges and using an offset frosting spatula to blend along the edge of the cake.

For The Chocolate Curls:
Place some napkins on a plate to catch your curls as you make them. Put the block of chocolate on another small plate and microwave for 15-20 seconds – it should just be starting to melt.
Holding the veggie peeler over the plate with the napkin, peel along one of the longer sides of the chocolate block to create a curl - press firmly and pull quickly! Using a wooden skewer, gently pick up the curls by skewering them, and placing them in the center of the cake. Work your way toward the outer edge until you reach your desired coverage. For shorter curls, peel one of the shorter sides of the chocolate.