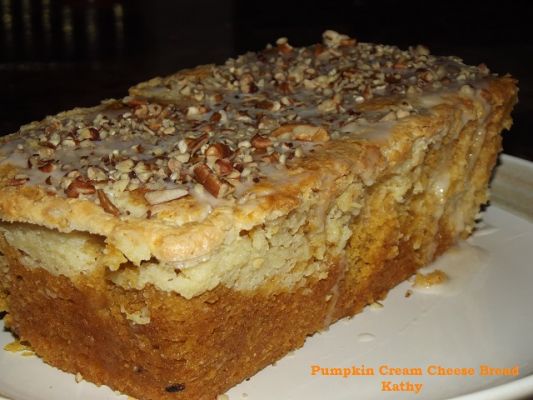 I found this recipe on Nancy Creative!

It's not Autumn if it doesn't include pumpkin! I'm proud of myself making this bread because it turned out great and I'm not a very good baker! I made this for my friend, Sherry (gratefulservant) Autumn contest and I'm sure glad I did! Nice and creamy on the inside with the cream cheese mixture swirled thru the pumpkin and little chopped pecans throughout! The top was nice with a little crunch and drizzled glaze topped with pecans! I could of eaten this without the glaze, that is how good it was! Next time I may just sprinkle the top with some plain sugar as it bakes and I bet it would be perfect!

I couldn't find a can of pumpkin that said "pumpkin puree" so I texted a friend and asked her and she said to get the can that said, 100% pumpkin and that is what I got!

1 cup powdered sugar
2 to 2½ Tablespoons half & half
½ to 1 teaspoon cinnamon (start with ½ teaspoon, that may be enough for you)
½ cup chopped pecans or walnuts for garnish

Preheat oven to 325°. Grease and flour two 8 x 4 x 3-inch loaf pans. I sprayed my pans and coated it with sugar and not flour.

In a medium mixing bowl, combine cream cheese, sugar, flour, egg, and vanilla; beat until smooth and creamy. Set aside.

In another medium bowl, combine the pumpkin puree, canola oil, eggs and sugar; beat well. Stir the pumpkin mixture into the flour mixture just until combined. Fold in the chopped pecans or walnuts.

Bake in a preheated 325° oven for 55 to 60 minutes, or until a toothpick inserted in center of the loaf comes out clean.

Cool bread in pans for 10 minutes; remove to a rack to cool completely.

While waiting for the bread to cool, mix your cinnamon glaze: combine powdered sugar and half & half, blending well; then add cinnamon and mix until smooth and creamy. Note: the cinnamon makes this glaze darker in color, so if you want a lighter, creamy color glaze, just add a dash of cinnamon to the mixture. Drizzle over completely cooled bread loaves and then sprinkle on nuts for garnish.