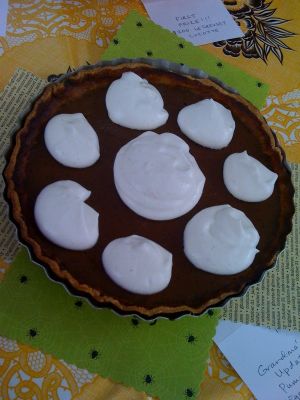 This is a twist of my Grandma's pumpkin pie recipe, which is a variation of the Libby's pumpkin pie recipe. I updated it by using fresh spices from a local spice market and using whole milk and whipping cream instead of evaporated milk. I also used organic ingredients whenever possible. I entered it into a pie making contest, judged by local food writer, Lorna Yee. Best of all, I won second place!

1. After removing the parbaked pie crust from oven, leave the oven rack on the lowest position and increase oven temp to 400 degrees (the crust must still be hot when filling added)

2. For the filling: while the crust bakes, mix (using KitchenAid or other stand mixer) the pumpkin puree, brown sugar, spices and salt until combined, about 1 minute on low speed.

3. Transfer mixture to a saucepan and bring to a simmer over medium high heat. Cook the pumpkin, stirring constantly, until thick and shiny, about 5 minutes.

4.Whisk in the cream and milk, return to a simmer briefly, then remove from heat.

5. Mix eggs in residual pumpkin bowl with mixer until uniform, about 5 seconds.

6.With the machine running on stir, slowly add about half the hot pumpkin mixture. 7.Stop the mixer, add the remaining pumpkin, and continue to mix until uniform.

8. Immediately pour the warm filling into the parbaked pie crust.

9.Bake until filling is puffed and lightly cracked around the edges and the center wiggles slightly when jiggled, about 25-30 minutes.

1. Combine whipping cream and eggnog in mixer with whisk attachment.

2. While the mixer is beating, slowly incorporate sugar.

3. When mixture has reached soft peaks, grate in fresh nutmeg to taste, mixing to incorporate.