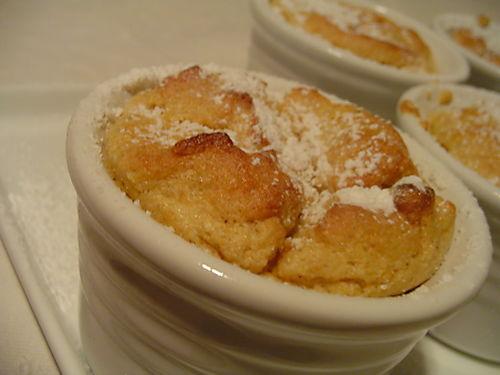 This came about when I was looking for a way to use up just a bit of extra pumpkin. They turned out so light and flavorful. Like an airy pumpkin pie filling.

In a small sauce pan, bring half and half and half, cinnamon, cloves & nutmeg to a boil. Remove the pan from heat, cover and let it steep for about 10-15 minutes. Strain, and discard cinnamon.

In a medium bowl, whisk together the egg yolk and 2.5 tsp of sugar. Whisk in the flour until well combined.

(Scary part number 1) Gradually add the hot milk to the egg yolk mixture and whisk continually so it doesn't curdle.

(Scary part number 2) Add the mixture to the saucepan over medium heat. Cook, whisking constantly, until the mixture thickens and can coat the back of a spoon (about 2 minutes).

Transfer mixture to a bowl and stir in the pumpkin puree.

In a separate bowl, beat egg whites until foamy. Add in remaining 2 1/2 tsp sugar and continue to beat with a mixer until the egg whites form stiff peaks. Don't overmix and dry out.

Fold 1/3 of the egg white mixture at a time into the pumpkin/yolk mixture, being careful not to deflate.

Spoon mixture into prepared rameskins and place them in a pan/dish. Pour hot water into the dish, coming up about 1 inch on the ramekins.

Bake for approximately 20 minutes or until souffles have risen and tops have become browned.

sbilokonsky
I ADORE PUMPKIN...so can not wait to try this!!