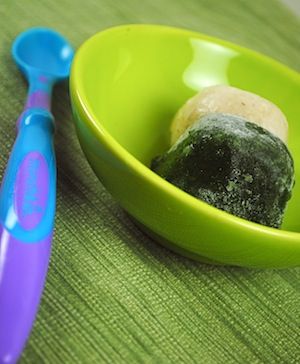 I’ve heard from numerous people that their babies LOVED spinach. Their baby would hate banana, or apple, or pear, but chowed down on spinach like it was a bowl of ice cream with extra whip cream, sprinkles and a cherry on top. Clearly these parents were delusional, this can’t be true?!?!

Um, ok, what’s the deal with kids and spinach, I mean hoooonestly.

Cheeks, she LOVES this stuff.

I was excited to give her her first bite of spinach. Also a little hesitant because if she decided to hate it and give me a little misting of spinach, that wasn’t going to be pretty.

Her eyes may have rolled back into her head with the first bite. And then with the second bite, which I couldn’t scoop fast enough, she moaned, and groaned. They say, who ever ‘they’ are, to try 1 new food at a time to see if any allergic reactions happen. Listen, if she’s allergic to spinach, this may be the end of us. Spinach is one of the only foods she’ll eat by itself, without a sweet banana livening things up, or a sweet potato to thicken it. She truly, from the bottom of her padded diaper butt, loves spinach. It’s really cute to see her get so exciteable for SPINACH!

Speaking of diapers, whooooaaaa, watch out, spinach, it’ll do a number on their um, how do I put this nicely, on their bowel movements. Our poor cloth diapers were stain free, until spinach came along. Oh well…

Steam the spinach in a pot of water. Drain spinach and discard water.

Puree the drained, steamed spinach in a blender or food processor for about 3 minutes. Portion into ice cube trays. Freeze trays. Once the spinach is frozen, break the cubes out and seal them in air tight ziblock bags.

Your baby food is now made, in individual serving sizes, just need to be reheated and served.