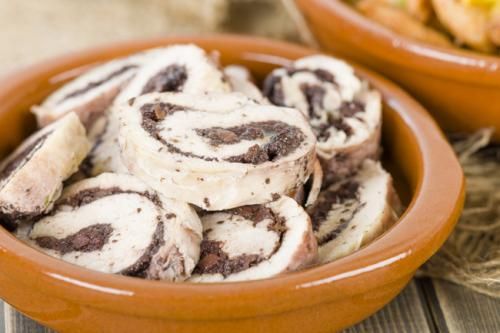 I originally wrote this recipe way back in 2002

I entered it into to Three Competitions:

1st Prize: A Week at Leith's Cookery School in London

Enjoy with my compliments:

I would probably think this suits Burn's Night on January 25th as a meal, I know it's not technically a holiday, but enough Scots celebrate it around the world.

1) To make this recipe easier, get your butcher to flatten out the chicken breast for you.

2) You could roll the haggis up in the chicken like a swiss roll, for a different effect when sliced.

3) You could roll the chicken and haggis up tightly in cling film/food wrap, twisting the ends shut and boiling for 20 minutes, instead of frying.

4) Instead of using the cream, you could replace it with a nice tomato sauce, using six tomatoes which have been peeled, deseeded and puréed.

5) You could cut the chicken at an angle and stand it on the plate to add height instead of slicing it!

Flatten the chicken breast, so it can be stuffed with the haggis.

Remove haggis from wrapping and cook until softened. Let cool, then stuff into the chicken breast.

Roll up the chicken breast, with the haggis inside, and pin shut with cocktail sticks.

Cook in a frying pan until golden on all sides. Alternatively, seal the chicken in a pan, then finish it off in the oven for 20 minutes at 190C/400F. Remove from pan then let rest.

In the pan, add the oil and the onion and cook until soft.

Add the whiskey and flame, (Flambe) (Removes the Alcohol)

Then pour in the porridge oats, cook for two minutes before adding the cream.

Cook until the porridge and cream have reduced and thickened, but not too much.

Slice the chicken into circles to show off the haggis inside, and fan on a plate, before coating with a little sauce. Serve with a spoonful of mashed swede (neeps) and crushed potatoes (champitt).