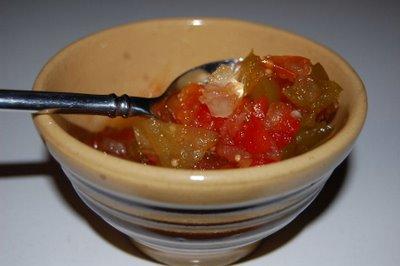 I have made this recipe for many years. My son made it this year. This recipe came from my now X sister in law. It is really good on hamburgs, hot dogs, and can be used as a salsa as well.

First off all the veggies should be just ripe, without any soft spots, mold or dark patches. If the tomatoes are cracked make sure to cut this part out. This is one of the best steps you can take to avoid spoilage of the sauce.

This recipe makes 6 one pt jars which is 12 cups. Aim for 12 cups of tomatoes, 3 cups of onions, 3 cups of peppers and 1 cup of celery. This leaves a little extra to accommodated cooking it down and if any is left over after filling the jars it can be stored in the fridge and consumed first.

Start by cutting the tomatoes up, I cut them to approx. 1/4"x1/4". Cut the peppers to about the same size followed by the celery cut up about half the size of the tomatoes & peppers. Then minced the onions, I used a machine but a course cheese grater will work as well.

Mixed the veggies together and then place them in layers in a colander. Followed by a few spoons of the pickling salt on each layer,about 1/2 cup total. This step will draw the fluid out of the mixture, concentrate the flavor as well as help kill off any pathogens in the mixture. Once it is all layered give it another good mix and leave this in the sink overnight or at least 6 hours.

After the salt has done its work rinse really well with cold water. I know this sounds counter intuitive but it does work. Once it is well rinsed I spun out the excess water in a salad spinner, in batches. This step could also be accomplished by simply pressing the mixture in the colander to remove the excess water.

Now you need to get the canner pot boiling to sterilize the jars and lids as well as to process the jar once filled. Well waiting for the pot to boil wash all the jars, lids and canning implements in hot, soapy water. Once it is boiling place to cleaned jars, threaded lids and implements in the cannier on simmer. Then place the sealer part of the lid in a separate small pot and ladle some boiling water over them, this is done so the rubber seal is not heated to much. Leave the jars and threaded lids on simmer until they are ready to be filled and leave the sealer lids to the side in the hot water.

Then ladle the sauce into sterilize jars, place a sealer lid on and then screw the threaded lid on until just tight. Place the sealed jars back into the canner, lower them down into the pot and simmer them for 5 minutes, if you notice small bubbles coming out of the jars this is normal. This step will further cook the sauce as well as expand the contents in the jars that once cooled will contract vacuum sealing the jar.

After 5 minutes remove the jars from the cannier and place them to cool on a t-towel. They will make a popping noise well they cool and within a few hours they should have all sealed. You can check the seal by pressing the center of the lid, if it does not move when pressed it is sealed properly. These jars can then be stored outside of the fridge, in low light conditions for around a year. If it does move these jars did not seal and they need to be stored in the fridge and consumed quicker.

The end result is a chunky relish with a thin sauce, it is best scooped out of the jar with a fork or slotted spoon.

* best used on hotdogs & hamburgers but would be equally as good on chicken, pork, sausage or fish.