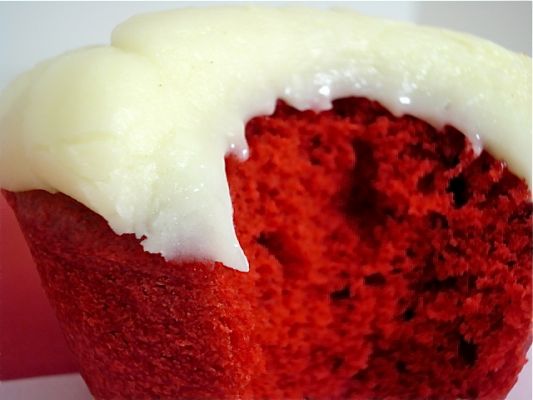 Are you looking for a great Red Velvet Cupcake? I wanted to do an East Coast vs. West Coast throwdown of these two cupcake institutions. NYC's Magnolia Bakery (red velvet recipe) vs. LA's Sprinkle's Cupcakes (cream cheese frosting recipe) all rolled into one mega cupcake. Who Won Out? Well, sorry to say, that I had to go with LA's Sprinkle's Cupcake. The frosting is the best cream cheese frosting I have ever tasted! But NYC is still the best!

To make the batter: In a small bowl, sift the cake flour and set aside. In a large bowl, on the medium speed of an electric mixer, cream the butter and sugar until very light and fluffy, about 5 minutes. Add the eggs, one at a time, beating well after each addition. In a small bowl, whisk together the red food coloring, cocoa, and vanilla. Add to the batter and beat well.

Divide the batter among the prepared pans. Arrange the oven racks in the upper and lower thirds of the oven and bake the cupcakes, switching positions of the pans halfway through baking, until a tester comes out clean, about 20 minutes. Cool the cupcakes in the pan 10 minutes, then remove from the pan and cool completely on a rack before icing. To ice, mound about ¼ cup of frosting on top of each cupcake and use an icing spatula to make a swirl on top. If desired, decorate with colored sprinkles.

Add sugar until just incorporated. Don’t over mix. It should be thick but not fluffy.

PastryChefTeresa
I tried thse cupcakes today to sell in my coffee shop. They are deliciously moist and just the right amount of sweet. The icing is just firm enough to stand up well to being piped on with a bag...but not too thick either. My only advice would be to rewrite the recipe before you start. As a baker by trade...I had to go through and seperate the dry ingreients from the wet and then I weighed everything so I cold easily refer to it by weights rather than cups and tsps. Other than that...I love this recipe. Kudos, five stars and three thumbs up. <3