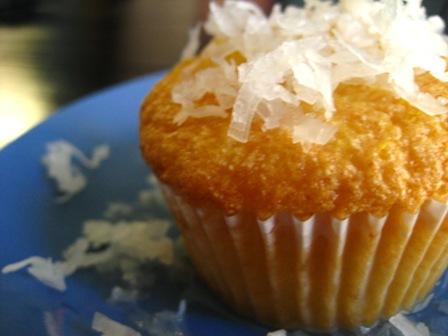 Many years ago I went to Turkey as part of a life changing vacation through the Middle East. I went and saw the Blue Mosque, walked around the capitol city, enjoyed the local air and culture, and had some wonderful meals. One of the more striking desserts that always seemed to show up was a dish called revani. It was a new experience in cake. It was dense, heavy, syrupy,with a heavy citrus profile. It was a cake revelation.

Revani is a traditional sponge cake of Turkey and other countries like Morocco and Lebanon. Rob's Lebanese grandfather made this more than once, and like any sponge cake the recipe is simple but getting truly amazing flavor takes patience and practice.

It's supposedly named after a famous Turkish poet who often extolled the beauty of food, but I can't seem to find any of his work on the internet if he supposedly did exist or if this is just a story. Regardless it's a beautiful cake that really would inspire one to put down their soul into prose.

This is a cupcake with forgiving ingredients. I had no semolina so I substituted Cream of Wheat. Nor did I have dry dessicated coconut, so I used sweetened (I have yet to go grocery shopping after I moved, and the only thing nearby is Albertson's, I went with what I could get at the moment). I also used a tangelo for the zest rather than a basic orange, though the revani I had in Turkey used some very flavorful exotic orange, one I could not identify and I'm sure have little chance of finding.

You have to eat them with a fork, they're too sticky and syrupy to go by hand (we tried and it just gets everywhere, which is fine for outside but not in the living room I just finished cleaning). Very citrusy and very sweet, they're delicious little sponge cakes. We enjoyed them with a bit of yogurt for me and clotted cream for Rob as the dairies just helped accentuate the flavors. The coconut was light and added a nice floral finish. Overall a playful cupcake perfect for spring dinners outside on the patio and for Turkish themed meals.

1/2 cup of semolina or Cream of Wheat
1/4 cup of flour
1/2 cup of sugar
6 eggs separated, room temperature
zest of one tangelo (or other orange)

Preheat the oven to 350. Sift the flour and semolina together in a large bowl. In another bowl, beat the yolks and the sugar together until light and creamy. Beat in the orange zest and then gradually beat in the semolina and flour mixture.

Whisk the egg whites until stiff peaks form. Remember to have them at room temperature and to start at a low whisking speed, then gradually get to higher speeds. You have to coax them into getting white and fluffy.

Fold the egg white mixture carefully into the semolina mixture. Spoon into paper cupcake papers (not foil!). Bake for 12-16 minute or until a toothpick comes out clean.

Spoon lemon syrup generously onto cupcake and bake for an additional 2 minutes. Remove from oven and allow to cool and absorb the syrup.

Transfer to a dish and serve at room temperature with clotted cream or yogurt and sprinkled coconut. Drizzle on any extra syrup you may have left over.

br1na
These sound fantastic, I'll certainly be trying them!