By scottw
Member since 2007 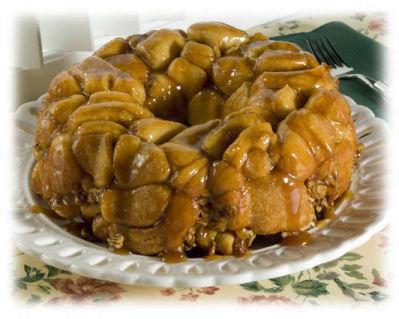 Caramel ice cream topping is the ingenious ingredient that gives this Monkey Bread recipe its warm and gooey greatness! This is one of the best monkey bread recipes you’ll ever try. (You can also toss in a few chopped pecans to add a yummy, nutty flavor!)


Cover with plastic wrap and let rise until double in size**
Remove wrap and bake at 350°F 35-40 minutes.

Place cinnamon rolls in refrigerator overnight to thaw. (Reserve frosting for another use)

Dip each roll piece into butter and roll in sugar.

Place in a sprayed bundt pan.

Cover with plastic wrap and let rise until double in size*.

koko25
Oh wo0ow! It's only missing some bananas =) Looks very yummy and I will deff try
scottw
Here is the best description of why it is called monkey bread from Wikipedia

Monkey Bread, also called "Affenbrot" (German, literally meaning "ape bread") Hungarian coffee cake and bubbleloaf, is a sticky, gooey pastry served as a breakfast treat.[1]Recipes for the towering bread first appeared in American women's magazines and community cookbooks in the 1950s. It is made with pieces of sweet yeast dough which are baked in a cake pan at high heat after first being individually covered in melted butter, cinnamon, sugar and chopped pecans. [2] It is traditionally served hot so that the baked segments can be easily torn away with the fingers and eaten by hand.[

babs
Scott.. why is it called Monkey Bread?