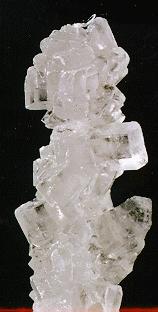 In the field of crystallography, these are called monoclinic crystals. Their shape is determined by the way the individual sugar molecules fit together.

4 (12-oz.) glass canning jars
4 (7-inch) pieces clean kitchen string
4 wooden skewers or pencils
4 1/2 cups sugar
2 cups water
10 drops red food coloring*
1/8 teaspoon cinnamon oil*
2 teaspoons vanilla extract
*Note
10 drops of your favorite shade of food coloring may be substituted for red food coloring, and 2 teaspoons of your favorite flavored extract, such as mint, strawberry, or orange, may be substituted for cinnamon oil.
Instead of cotton string, you can use sticks.

Arrange jars in bottom of a large Dutch oven, and fill with enough water to cover jars by 1 inch.

Bring to a boil over medium-high heat; boil 2 minutes (this is to sterilize).

Pour about 1 cup syrup mixture carefully into each jar.

Tie one end of the strings to the middle of the pencil (one per jar).

The string should be about two-thirds as long as the jar is deep.

Dip the string into the sugar solution, remove it, lay it on a piece of waxed paper, straighten it out, and let it dry for a few days.

Loosely cover with jar aluminum foil.(The string will provide the surface on which the crystals will grow.

As water evaporates from the string, small crystals of sugar will encrust the string.

Future growth will be concentrated around these points.)

Gently suspend the prepared string in the solution and let sit at room temperature, undisturbed, for several days.

You can check each day to see how much your crystals have grown.

It’s tempting, but don’t touch the jar until the experiment is finished—it usually takes about seven to fourteen days.

At the end of the week, the crystals on your string should be clearly defined, with sharp right angles and smooth faces of various sizes.

After two weeks even more so.

Remove strings from jars, and suspend strings between jars until crystals are dry (about 1 hour).

Remove strings from skewers or pencils.