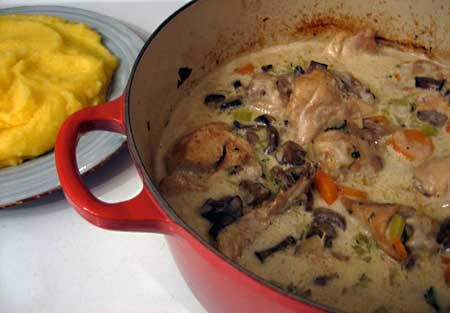 What makes grandma's creamed chicken so special? I wish I knew! It's essentially a chicken fricassee, common in many cultures. And yet when grandma pulled her big roaster brimming with this creamed chicken from the oven, I remember people scurrying to table, undoing the top button of their pants as a preventative measure against the inevitable belly-stuffing that lay ahead. That's the power, I suppose, of simple comfort food shared with those we love.

Some prep notes: Toss the chicken neck and gizzards into the pot during cooking; they'll impart some great flavor, and there always seems to be at least one person in a family who considers these items tasty prizes. If there isn't one of those people in your family, fish them out before serving (not a chance in the Mihoren family; there will be several people fighting over these bits). In the old country, smetana, a soured heavy cream, would have given this dish extra depth, but it's just as nice with the conventional dairy called for in the recipe below (I can imagine, though, that using creme fraiche would mimic the smetana effect).

A few words of advice on consumption: First, get in there early and get yourself a leg. The legs go fast and they're the perfect excuse for picking up your dinner and getting to lick creamy gravy off your fingers. Second, always ~ and I mean always ~ reserve at least a ladle's worth of gravy for the end to mop up with some bread.

Finally, creamed chicken is traditionally served with mamaliga, the Romanian take on the cornmeal porridge better known as polenta. The quantity is easily increased to serve many (grandma used to feed it to hundreds at church dinners).

1. Preheat oven to 325°F. In a large bowl, mix together onions, garlic, celery, and carrots. Place half the vegetable mixture in an ovenproof lidded casserole. Layer chicken pieces (including neck and gizzards, if using) on top and cover with remaining vegetable mixture. Cover casserole and bake for 1 hour.

2. Meanwhile, cook mushrooms in a pan or skillet over medium-high heat, stirring frequently until they begin to give up their moisture. When all their liquid has been released and they begin to brown slightly, remove them from the heat and reserve. (Cooking them separately means they don't water down the stew.)

3. After 1 hour of cooking time, remove casserole from oven and check stew. The vegetables should be nearly cooked through, the chicken should be starting to brown, and there should be a nice amount of liquid in the pot. (If vegetables are still crisp and chicken is undercooked, cover casserole and return to oven for an additional 15–20 minutes.) Place flour in a mixing bowl and add cream while whisking constantly until the mixture is smooth. Add cream, reserved mushrooms, and paprika to stew. Cover casserole and return to oven for 1/2 hour.

4. Remove casserole from oven and stir contents. Season with salt and pepper to taste. Sprinkle with chopped fresh parsley or dill before serving with mamaliga and/or fresh bread.