By foodie
Member since 2006 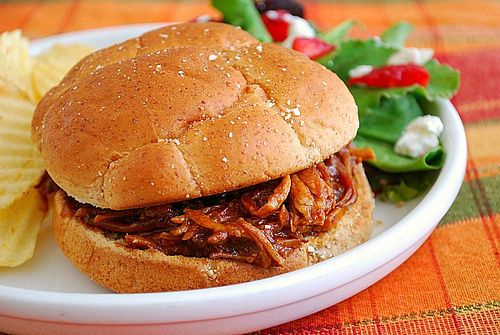 When it comes to summer drinks, a favorite at our house is root beer. There's something about root beer that really makes summer even more fun. Maybe it's the nostalgia or even the fact it's awesome poured over a mug of vanilla ice cream. But aside from it's obvious sweetness, root beer does well in savory applications too. For example, in these Root Beer Pulled Pork Sandwiches, it's sweetness lends itself well with a homemade bbq sauce and tender, slow cooked pork. You'll be surprised how versatile root beer is after having one of these sandwiches!

When I saw root beer was on sale at the store, I immediately thought of making some root beer floats for a nice summer treat. But you can only have so many root beer floats. With a few cans to spare, I used one can for this recipe. It's also a recipe that's perfect for summer because it won't heat up your kitchen since all the magic happens in a slow cooker! So grab some root beer, pour some over a few scoops of ice cream, add a can to a slow cooker with some pork and enjoy a lazy summer with a no fuss meal...

Place the pork in a slow cooker; pour the root beer over the meat. Cover and cook on low until well cooked and the pork shreds easily, roughly 6 to 7 hours. Note: the actual length of time may vary according to individual slow cooker. Remove the pork from the slow cooker and transfer into a large bowl. Discard the remaining liquid in the slow cooker.

For the BBQ sauce, whisk ingredients in bowl; set aside until ready to toss with pork.

pattit
I just had a root beer barbecued pulled pork sandwich last weekend. It was awesome. I was hoping to come on here and find a recipe. Thank you for sharing.