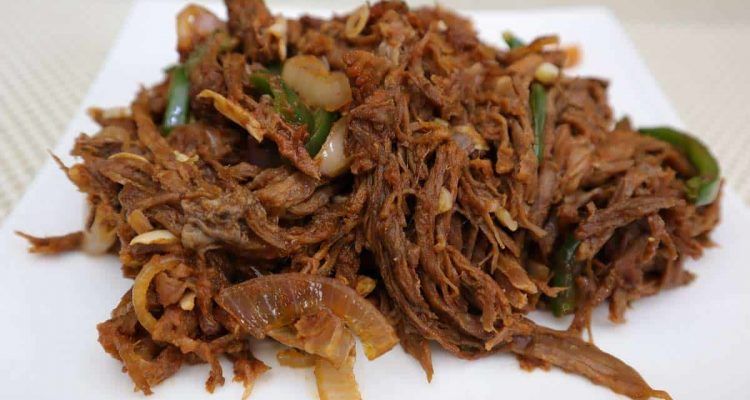 "A typical dish of Cuban cuisine"

Contrary to what many believe and think, the dish known as Ropa Vieja does not have its origins in the largest of the Caribbean islands, but rather far away, both in distance and in time. Its origin dates back to medieval Spain.

According to Wikipedia it is a dish that is made and consumed in different regions of Latin America and Spain.

Why the name Ropa Vieja?

The name Ropa Vieja comes from the Sephardic cuisine (Spanish Jews) and in their language the name was "handrajos", which means "rags" in Spanish, added to the appearance of this meat, which really looks like shreds, rags, rags, rags, torn rags.

In Cuba, a very popular story is told about the origin of the name Ropa Vieja, and it refers to a very poor man who had no money for his family to eat meat. One day, sad and hungry, he gathered his rags, sold them and with the money collected he bought a handful of meat to prepare dinner that night.

500 grams of beef, can be skirt steak.
1/2 cup of tomato puree
3 tablespoons of oil
1 large onion
2 large chili peppers
2 spoonfuls of dry wine (it can also be any white wine)
1 tablespoon vinegar
1 teaspoon of rum (if you have havana club, it's better and you can have a little drink at the same time)
1 teaspoon cumin
Pepper and salt to taste

Place the meat in a saucepan with water and put it on the fire, cook until the meat is tender (if you have a pressure cooker much better, the meat will be cooked much faster).

Once the meat is cooked, remove it from the heat, let the meat cool down.

Mash the meat and cut it into cubes, with the help of a fork open the meat so that it separates, in not very thin strips.

Crush the garlic cloves and cut the onions into thick rings, cut the chili peppers into thin strips.

Place the oil in a frying pan on the heat. Add the onion, garlic, chili peppers, cumin, bell pepper and salt.

When it starts to fry, add the meat and cook for 5 minutes.

Add the dry wine or white wine, vinegar, tomato puree and cook for another 10 minutes, stirring it from time to time to prevent it from sticking.

Add the rum and stir.