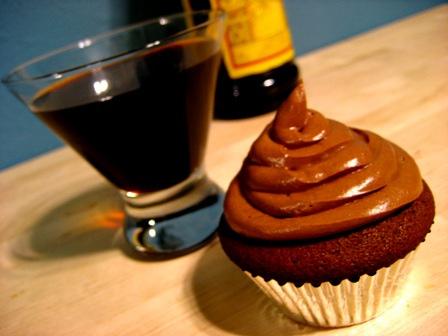 This cupcake is a game you play and a play on words. It's fun and interactive, as good food should be. We all know the deadly game of Russian Roulette, do we not? Six chambered gun, 5 chambers empty, 1 chamber filled. Spin the barrel, point to your head and pull the trigger. We also know roulette, the great game of Vegas, Paris, and Monaco. Both games of chance where you can win big and loose bigger. These cupcakes play the same kind of game.

Utilizing the Russian Roulette aspect, I made Black Russian cake. Chocolate and coffee liquor - how can you go wrong? The cake is old fashioned, very "like mom made it", but the coffee and Kahlua give an adult flavor. The frosting builds another layer of texture and flavor which is always tastylicious. I really wanted to include red and black color like with a roulette wheel, but I didn't have the equipment to make red and black pastillage numbers, and red and black sprinkles seem tacky to me. Ah well, another day.

The chance you take with these cupcakes is you may have to quite literally bite the bullet. One of these are laced with a bit of spice. And not bad spice. The cupcakes taste great. People were actually looking for the bullet cupcakes. But if you're wary and your luck isn't with you and you pick the wrong cupcake, you won't know until after the first bite is swallowed.

You feel a tingle.

Then the burn in the back of your mouth. Cayenne pepper begins to set you ablaze, but you love it and eat the rest. The best bullet you ever took. Followed by a big glass of milk to cool you down of course. I think Rob's description of it when I tricked him into eating it was, "I'm going to stab you in the mouth." (Can you feel the love?) Before you all get all "That's abusive, etc, etc" know that I tried one too and would never serve anything I wouldn't eat myself. Trust me, I ate four before I found a proper balance of heat. Use yourself as a guide when it comes to spicing the unlucky bullet cupcakes. Out of two dozen cupcakes, I only spiced three of them which is just enough in my opinion. Enough to make people nervous.

This is a great cupcake for the office (we all had a laugh, even the unlucky players who ran for water or a tissue for their runny noses) or as a game with friends at a party. Go ahead and try your luck.

Beat the eggs and egg yolk in, one at a time, mixing for 30 seconds after each addition.

Measure the rest of the dry ingredients and sift together in one bowl. Mix the wet ingredients into another.

Remove enough batter for however many cupcakes you want to spice up. Add 1/4 of a teaspoon of cayenne pepper for each cupcake you plan to make a bullet of. Mix well and scoop into cupcake papers.

Scoop the rest of the batter into cupcake papers.

Beat the butter until light and creamed. Add a cup of the sugar and mix well. Add the cocoa, Kahlua and coffee, mix. Add the other cup of powdered sugar and more if needed to taste and preferred frosting consistency.

sugarplum_2
with your writing ability you need to do a cookbook.
Possible titles,
"For Your Mouth Only."
"Recipes that Make the Chef Run for Cover."
What do you think?
:)