SPECULAAS AND COCONUT NO BAKE CHEESECAKE 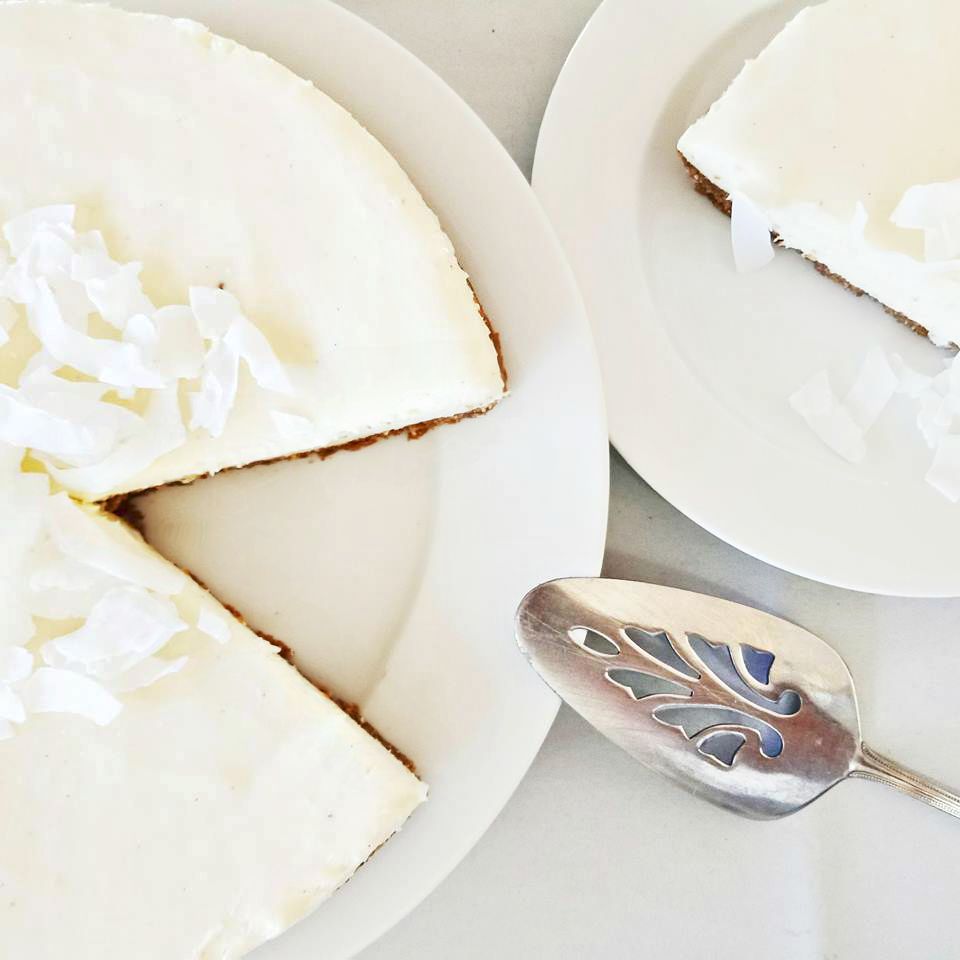 "Here's my no fail, no bake cheesecake with a coconut Dutch twist."

I was soo nervous when I started working on this recipe, because I've read 101 reviews on other recipes where people who have tried them have had them fail miserably.. they just wouldn't set! I really didn't want this to be one of those recipes.

Originally I wanted to steer clear of gelatine, purely because I didn't want to scare anyone away, but without gelatine one runs the risk of putting all these ingredients together and ending up with slop... which is exactly what happened, again.. and again.

After a few attempts I did manage to get close. I formed a recipe for a cheesecake that would set somewhat solid without gelatine, but it was still ever so slightly too wobbly for my liking. It set enough to cut into slices, but not enough to hold its shape perfectly, it sort of bulged at the edges.. like a water balloon threatening to burst.

So I made the executive decision that in order to achieve what I wanted, I needed to use gelatine.. sorry guys! But here's my no fail, no bake cheesecake with a coconut Dutch twist.

If you're now thinking "aww but I like my cheesecake a little on the soft side" just leave out the 1/4 cup of water and 4 tsp gelatine powder.

Line a 9 inch cake tin and set aside. Don't just grease the base (I made this mistake the first time). As you're not cooking this cheesecake the butter won't melt beneath it to lubricate it, instead it will just act as glue and you won't be able to remove your cheesecake from the base once it's set.

Place all ingredients for your base into a food processor and blitz until well combined.

Scrape your base mix into your pre-prepared tin, and using the back of a spoon spread it out evenly, compacting it lightly as you go. Set aside.

Place 1/4 cup of water into a saucepan and set on a cold stovetop.
Sprinkle gelatine on the surface of the water and heat the water slowly, whisking gently with a fork until the gelatine has dissolved. Avoid allowing the mixture to boil as gelatine is sensitive to boiling temperatures and exposure to this sort of heat can cause it to lose it ability to set.
Set aside to cool slightly.

(If your gelatine cools too much, it will set, but don't stress, just put it over a low heat, whisk with a fork and it will melt again.)

Place cream cheese and lime juice into a large mixing bowl and combine with an electric beater on a medium speed.

Once loosely combined, add the seeds from your vanilla pod and gelatine, turn your mixer to full speed and gradually pour in your condensed milk.
Continue to beat your cream cheese mixture until there are no lumps.

Once loosely combined, add the seeds from your vanilla pod and gelatine, turn your mixer to full speed and gradually pour in your condensed milk.
Continue to beat your cream cheese mixture until there are no lumps.

(If you find the lumps just won’t go away, it may be because your mixture was too cold when the gelatine was added, and it set before it was properly mixed through. Don't worry! it's salvageable. Place a small amount of water into a saucepan and place it over a medium heat, then place the bowl with your cream cheese mixture atop the saucepan and allow the steam to slowly heat through the cream cheese mix.. just like melting chocolate. Stir the mixture regularly to ensure the heat is evenly distributed and allow it to heat through to just above room temperature, then hit it with the electric beaters until smooth. Allow to cool slightly before moving onto the next step.)
Pour cream cheese mixture into your cake tin atop your base and set in the fridge to set for a minimum of 4 hours. Remove from tin and serve!