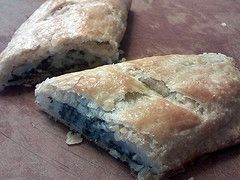 Following on the heels of a St Patrick’s Day, a sandwich of potatoes and something green made lots of sense to me. Dough languishing in the freezer seemed just the ticket to create a savory potato and spinach hand pie. A small chunk of cheddar begging to be used was part of the equation too!

1. In a small skillet, heat 1 tablespoon oil over medium. Cook, stirring frequently until onion is soft and golden, about 10 minutes. Meanwhile, in a medium saucepan of boiling salted water, cook potato until tender, 10 to 15 minutes. Drain.

2. Return potato to pan and mash with a potato masher or spoon. Cook over low heat until the bottom of the pan starts to show a starchy film. Add 2 tablespoons remaining oil, spinach, and cheddar and cook until cheese has melted. Season with salt. Cool to room temperature.

3. Preheat the oven to 400. On a lightly floured work surface, roll dough out to a 15 x 8 -inch rectangle. Cut dough into 4 rectangles. Brush with remaining 2 teaspoons oil and sprinkle with Parmesan. Divide potato mixture among the rectangles, placing it down one half of each long side, leaving a 1-inch border all around. Fold uncovered side over other potato mixture; press to seal. Using a fork, crimp the edges. With a paring knife, make 3 slits down the top of each (for steam vents). Place on the baking sheet; brush tops with egg wash. Bake until golden brown and crisp, about 20 minutes. Transfer to a wire rack to cool slightly. Serve warm or at room temperature.