By polyxena2
Member since 2008 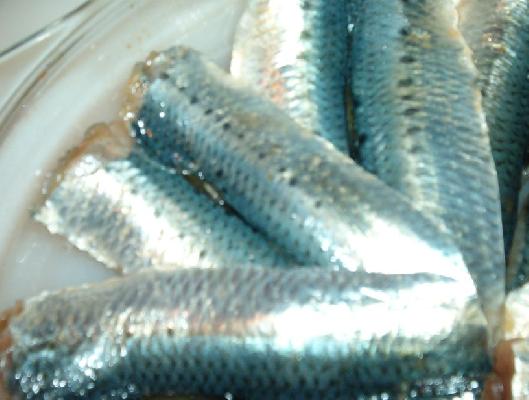 I am not by nature an early riser but one of the the things that I like to do to pamper myself on a Saturday morning is roll out of bed and head off to do shopping at Piedimonte's. This means that I can bring home a freshly baked almond croissant for breakfast. Sometimes I go slightly further afield to Canals in Nicholson St, the best fish shop in Melbourne.

Today I had a craving to cook a sardine recipe based on one by Lorenza di Medici but I wasn’t sure whether sardines were around. It was very cold and raining but I got myself out of bed and to Piedimonte’s, and thence to Canals. And guess what was in the Canals window? Filleted and flattened sardines just like I wanted! I was also tempted by the Pacific oysters and cooked prawns as I waited my turn. So I went away satisfied!

And the sardines? I wanted to cook an old favourite which involves baking the sardines with breadcrumbs, oil, orange juice and currants. There were a couple of obstacles. First, the pottery dish I have always used had cracked and was unusable for baking. Second, I couldn’t find the Lorenza di Medici recipe book anywhere amongst my cookbooks. I didn’t need the recipe book to cook the sardines but, so that I could discuss it here, I wanted to see what her recipe involved as opposed to mine which I know I have varied from Lorenza’s. Finding another dish proved less of an obstacle than finding Lorenza di Medici’s The Renaissance of Italian cooking which remains mislaid.

Pre-heat oven to 160 degrees. Place the sardines in a circular arrangement in a round dish that is suitable for oven to table use. Sprinkle the currants over. Add breadcrumbs. Pour on orange juice to cover and dash with olive oil. Toss pinenuts on top. Place in the middle of the oven and cook for 30 minutes.

Serves four as an entree and two as a main meal. For a main meal serve with salad or vegetables

polyxena2
These are fresh sardines which have been cleaned, etc by the fishmonger. It would not work with canned fish as it is already cooked.
pieman
Sounds worth trying! How many cans would be 12 sardines? How do you flatten them?