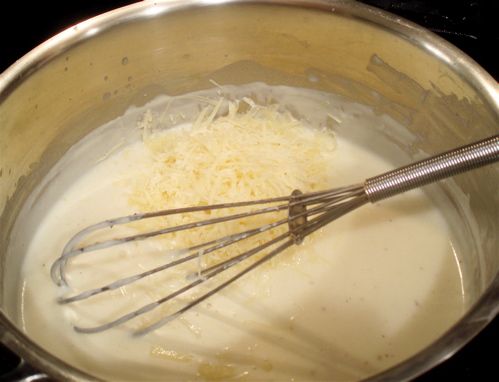 Julie Child ROCKS!!! Her instructions, thought they are not typically laid out in the manner in which we are use to, explains in such a way that you know what you're looking for....not just doing. It doesnt just say "stir continuously for 2 minutes" but it says "stirring until the butter and flour froth together for 2 minutes without coloring". That one simple word....Froth....spoke volumes to me. That was the point where the flour had truly dissolved and was no longer detected. Not only in flavor, but in texture. And what I ended up with was the most amazing creamy cheese sauce I have ever made or ever hoped to make.

The picture I have attached shows the sauce in process at the point where the cheese was added. It is not the finished product.

Sauce Mornay begins with a simple Sauce Bechamel, which is a basic white sauce. What makes it a Mornay are the simple ingredients that are added directly afterwards.

In a small saucepan, heat to just a boil, while stirring, the 2 cups of milk and 1/4 teaspoon of salt. Remove from heat and set aside.

Melt 2 tablespoons of butter in a heavy-bottomed saucepan, over low heat. Blend in the flour and cook slowly, stirring continuously until "the butter and flour froth together for 2 minutes without coloring," thus creating a roux.

Remove from heat. As soon as it stops bubbling, pour in your hot milk all at once. Immediately start beating with a whisk, vigorously. Make sure you gather all of the roux from the sides, bottom and edges of the pan.

Return to a moderate heat and stir until the sauce comes to a boil. Boil and stir for 1 minute.

Remove from heat and beat in salt and pepper to taste.

Beat in the cheese until they have melted and are well blended into the sauce.

Season with nutmeg, cayenne and salt and pepper (if needed). Stir in the butter a bit at a time until melted and blended.