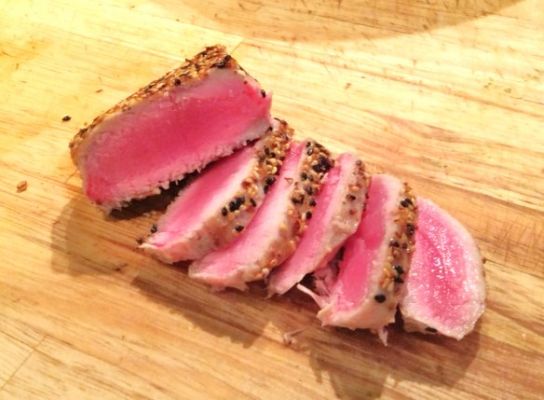 For the Potatoes Cooking Class -113

This incredible dish has been making an appearance on our table since 2002. Over the years I have changed it up a bit and this is my tried and true version.

Everything but the tuna preps ahead so it comes together at the last minute and makes an impressive and tasty dinner. The sweet potatoes and the slaw are the star of this dish....until you taste the Kecap Mainis!

If I'm ever on death row this is probably going to be my last request.

Bonus: the Kecap Manis keeps for months and is a great sauce to pull out and dress up ALMOST everything.

I’ve made this beautiful dinner dozens of times and I make it in the following order:

FOR THE KECAP MANIS

Bring all ingredients to a boil and reduce to half the original amount. Discard the star anise. Cool and pour into a squeeze bottle.

Can be made days ahead and it keeps in the refrigerator for several months. (I always double this recipe and keep the leftover sauce for other dishes.)

Fry eight wonton wrappers in hot oil. Drain on a paper towel and set aside. These can be made at least 4-6 hours ahead (or maybe more if it’s not humid).

FOR THE ASIAN SLAW

Stir together the sugar, sweet chile sauce and vinegar. Set aside.

Combine the cabbage and mint and put in an airtight bowl or bag and refrigerate until ready to use.

About a half an hour before serving combine the dressing with the cabbage/mint and toss to coat, leaving at room temp until ready to serve.

FOR THE SWEET POTATO AND CRYSTALLIZED GINGER PUREE

Bake the sweet potatoes at 400 until tender. Cool slightly and scoop out the flesh. Add the butter and ginger.

Puree, (I use a stick blender) adding a bit of chicken broth, a little at a time, if needed to achieve desired consistency.

Stir in chives, season with salt and pepper. Can be made a few hours ahead then re-heated and then held warm in a low oven while searing the tuna.

FOR THE SESAME TUNA

Bring fish to room temp. Combine sesame seeds, salt and pepper on a plate. Coat tuna on all sides by pressing it into the mixture.

Put a small amount of olive oil into a smoking hot skillet and sear tuna to rare/medium-rare, about 1-2 minutes per side, max. Cut into 1/4" slices.

Place 1 wonton in the center of each plate. Spoon about 1/8 of the sweet potato (or enough to just cover the wonton) onto the wonton, then add 2 or 3 slices of tuna.

Repeat layer with another wonton, sweet potato and tuna.

Mound about one cup of the slaw on top of the tuna and drizzle Kecap Manis over the top and on the edges of the plate. Prepare to wow your dinner guests!