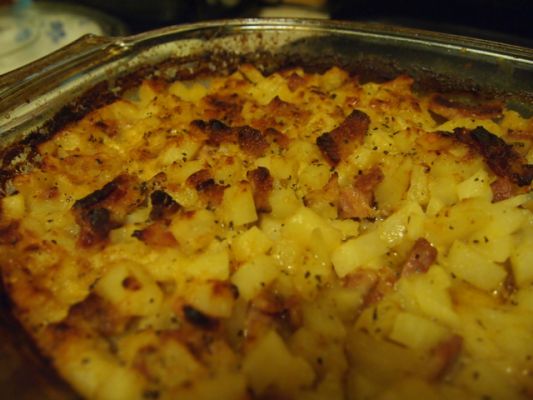 While this recipe ended up pretty good, we had some trouble with it. First, although no one mentioned it in the original recipe or the comments, I believe the prepared hash browns used in the recipe were pre-cooked in some way. I decided to use regular diced potatoes and we had difficulty getting the potatoes cooked through. It took much longer to bake then called for and still the potatoes weren't as thoroughly cooked as we would like.

In the future, I would probably parboil the potatoes for 5-10 minutes, cooking them halfway before including them in the casserole mixture for baking. I have also altered the temperature and instructions of the original recipe to help the baking time.

That said, these were extremely tasty and something I would definitely make again. The flavors were strong and pleasant and while not "creamy" it certainly gave the feeling of traditional scalloped potatoes with both a crunchy top and sides and a smooth interior.

If using uncooked potatoes instead of prepared hash browns, parboil for 5-10 minutes and drain before continuing

Combine all ingredients into a large bowl

Bake, covered for 45 minutes (or until potatoes are cooked through, you may have to adjust this for your ingredients and oven)

Remove cover and bake for an additional 30 minutes until casserole is set, golden brown and crunchy on top